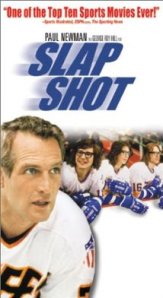 my thoughts: Anyone who loves hockey has watched Slap Shot not once, but many times in their life. This movie is a cult classic that has provided generations with laughs.

Reggie Dunlop (Paul Newman) is the player/coach of the Charlestown Chiefs, the worse team in the Federal League. In order to win and save the team from moving, he must transform their image and style. The Chiefs turn into a bunch of brawlers who fight and intimidate their opponents on the way to victory. The misfit Hanson Brothers join the team, and despite their goofy appearance and lifestyle, cause more mayhem than anyone could have ever imagined. The team bounds together and provides movie goers with some of the funniest hockey scenes ever. There is a lot of off-ice storylines involving road trips, drinking, and sex but The directors did a great job portraying hockey life in the 1970s with all the vulgarity.

If you need a good laugh, turn on Slap Shot, and fall in love with the Chiefs.