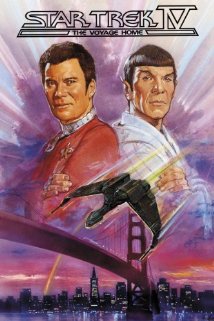 movie summary: To save Earth from an alien probe, Admiral Kirk and his fugitive crew go back in time to 20th century Earth to retrieve the only beings who can communicate with it, humpback whales. (www.imdb.com)

my thoughts: Star Trek IV the Voyage Home was a hilarious movie. The plot was really silly (in terms of finding the whales to communicate with aliens) but all the characters, Admiral Kirk, Spock, Scotty, Chekov, and Uhura were so funny trying to blend in with people in 1986 San Francisco.

The must watch part of this movie is when Kirk (William Shatner) and Spock (Leonard Nimoy) end up at the aquarium. The pair join a tour group to get a closer look at the whales, Spock disappears and reappears in the water tank performing a mind-melt with a whale. The expression on Kirk’s face was priceless. After the aquarium Kirk, Spock, and Scotty have to rush over to the hospital to rescue Chekov who has been committed for being considered crazy.

This movie was one of the rare times the storyline didn’t feature the crew on a starship like the Enterprise. After the crew manage to save the world thanks to help from the whales, the movies ends with the everyone stepping aboard a brand new redesigned USS Enterprise, with the code of NCC 1701-A.

Star Trek IV is a fan favorite simply because it humorous and didn’t follow in the same path of the previous movies.