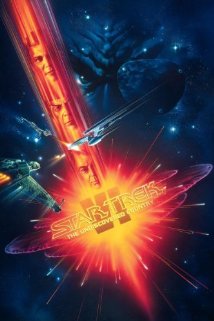 movie summary: On the eve of retirement, Kirk and McCoy are charged with assassinating the Klingon High Chancellor and imprisoned. The Enterprise crew must help them escape to thwart a conspiracy aimed at sabotaging the last best hope for peace. (www.imdb.com)

my thoughts: Star Trek VI was an enjoyable film. It showcased every major character Kirk, Spock, Scotty, Chekov, Uhura, and Sulu coming together for one last battle to save the universe. Kirk (William Shatner) gets in trouble like always (you’d think he would have learnt a lesson or two by now) but this time he is actually innocent and being framed for murder. Klingon high officials murder one of their own and plant evidence to get Kirk in trouble for it. They vow to destroy Earth unless he is sentenced to death. After surviving his imprisonment and trial, Kirk manages to undo all the Klingon plans to assassinate a Starfleet commended, which would have sparked a war to bring the end of peace for the galaxy.

This final Star Trek movie has a decent story and is far better than previous film, but lacks the humour from the fourth film. The uniforms are horrible to look at, but this was a great send off for the characters from the Original Series. The last Captain’s log and parting shot of the Enterprise crew on the bridge was touching, because this was their final mission.

One thought on “Star Trek VI: the Undiscovered Country (1991)”