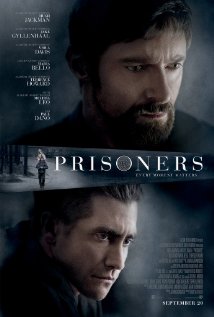 movie summary: When Keller Dover’s daughter and her friend go missing, he takes matters into his own hands as the police pursue multiple leads and the pressure mounts. But just how far will this desperate father go to protect his family? (www.imdb.com)

my thoughts: Prisoners is a movie that everyone should see at some point, whether you go to the theatre or wait for it on demand, the story, acting, and ending blend together to form an amazing movie.

Keller Dover (Hugh Jackson) and Franklin Birch (Terrance Howard) are best friends who live in a small Pennsylvania town whose families gather for a  Thanksgiving dinner. After the meal, their young daughters Anna and Joy go outside to play then disappear. The only clue is an old RV that was last seen driving around the neighbourhood. After a quick search of nearby houses, the police are called in.  Detective Loki (Jake Gyllenhaal) is one of the first responders and takes charge of the case. Later that night, the RV is found but with no girls inside. The driver is a 20 year old named Alex Jones (Paul Dano) who is taken into custody. There is no evidence he kidnapped the girls, because he has an IQ level of a ten-year old, so he is later released. Keller is so convinced that Alex has taken his daughter, that he sets out on a dark path to kidnap Alex and torture him until he talks. Detective Loki is trying his best, but doesn’t have many leads to follow. After going through missing children cases from the past, he manages to compile a list of potential suspects. Keller and Franklin keep talking to Alex in hopes of finding out where their daughters are, but he doesn’t know.

After catching one potential suspect, Detective Loki is able get new information about a maze where the girls are, but the new mystery is where this maze is located. Joy, Franklin’s daughter, was able to escape and is found. She provides Keller and Loki with a clues about where Anna is. They both rush out of the hospital and head out on a wild chase to where they think the real kidnapper is, but each end up in different places. Although they both found something they were looking for, only one of them has come face to face with the real kidnapper.

Prisoners is a good movie because the story plays out like its happening in real life. The girls go missing for six days, and with the length of the movie, each day is played out in it’s entirely. The raw emotion portrayed by each family member would make anyone wanna get out of their seat to help, but like the main characters, no one would know what to do. The plot has so many twists and turns, that one would actually shed a tear for the abuse potential kidnapper Alex takes. No one will guess who the real kidnapper is, although there a few moments in the movie that help build up to such a conclusion. When the credits start, some might be displeased with the final scene of the movie, because it leaves the audience to make a decision about the future of everyone involved.