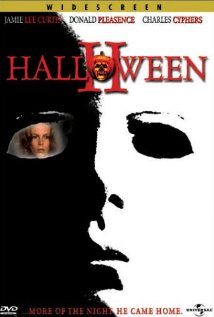 movie summary: Laurie Strode is rushed to the hospital, while Sheriff Brackett and Dr. Loomis hunt the streets for Michael Myers, who has found Laurie at the Haddonfield Hospital. (www.imdb.com)

my thoughts: Halloween 2 picks up mere minutes after the first one ends and Michael gets up and walks away.

Laurie Strode (Jamie Lee Curtis) is taken to Haddonfield Memorial hospital for stab wounds. Doctor Loomis (Donald Pleasence) meets up with Sheriff Brackett (Charles Cyphers) and starts to search the neighbourhoods for a wounded Michael. The sheriff finds out his daughter is one of the victims and leaves Loomis with his deputy. Michael begins the long walk to the outskirts of the city where the hospital is. Once inside, Michael slowly paces the hallways killing off hospital staff one at a time.

On the other side of town, Doctor Loomis is at the Myers old home where Michael was once. A state trooper shows up with orders from the governor to get Loomis out of the city, since the Myer killings are big news. Loomis is escorted out-of-town, when he told the grim news that Laurie is Michael’s sister. He takes the trooper hostage and demands to be driven to the hospital.

Michael finally finds Laurie’s room but she is gone. She is semi-consensus and limping out of the hospital. Loomis and the trooper show up and can’t find Laurie in the parking lot. Michael kills the trooper and chases after Loomis. Michael is led to a room filled with oxygen tanks where Loomis sacrifices himself to kill Michael.

Halloween 2 ends with Michael’s body laying on the floor burning.

Part 2 is not as scary as the first movie, but let me just say I dread the day I ever need to spend overnight at the hospital. I’ll always wonder where in the building Michael is. In 1979 this was a great send off for one of cinemas deadliest murderers.