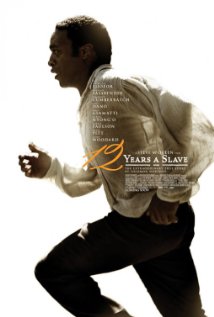 my thoughts: 12 Years a Slave is considered a favourite for an Oscar for Best Picture and is by far one of the year’s best films. The critics and audiences are treated to a masterpiece of storytelling about a free black man named Solomon Northup (Chiwetel Ejiofor), kidnapped and sold away to a slave owner in the south. He spends 12 years as a  slave while experiencing the worse human behaviours under cruel God-fearing slave owners.

Solomon is a skilled violinist and carpenter from Saratoga, New York, who is offered a job with the circus in Washington, DC. After a week of performing, he is drugged and kidnapped by a group of white men. He is locked away in a basement and whipped for claiming he was a free man. Shortly thereafter, he, along with other black people, are shipped down to New Orleans, where they are sold off for a few hundred dollars apiece. He keeps quiet about his past as a free man for fear of being whipped or killed because where he is going, it wouldn’t matter what his real story was.

After several years Solomon is traded from slave owner to slave owner. His final owner Edwin Epps (Michael Fassbender), is very abusive and cruel to his slaves (or property as he calls them). Whenever one of those gets out of line, harsh punishment is laid down upon them, sometimes at the forced hand of another slave. One day when a female slave named Patsy (Lupita Nyong’o) gets out of line, Epps forces Solomon at gunpoint to whip her within an inch of her life. Solomon himself has been at the other end of the whip several times, with many scars to prove it. He has managed to survive death numerous times and makes it back alive after his one attempt to run away isn’t successful.

One day a white Canadian carpenter named Samuel Bass (Brad Pitt) is hired to help build sheds on the Epps property. He becomes aware of Solomon’s talents and asks him about his story. Solomon is afraid of the consequences of sharing all the details of his capture and years of slavery, but he has nothing to lose except his life, so he tells Bass everything. Bass is from the north, where the folks are against slavery, so he agrees to write a letter for Solomon to his family back home to inform them of where he is. Within a few weeks, the sheriff shows up to the plantation and calls out Solomon. The sheriff has his free papers and takes him away. Epps is distraught and fights until the end but ultimately loses the battles when Solomon is returned safely to Saratoga.

12 Years a Slave is based upon a true story, so if you read this far and were disappointed with the spoilers in my review, you must have known he survived to write his own story. I can’t imagine what living a slave life must have been like for 12 years, but Chiwetel Ejiofor did a fantastic job depicting it. He displays a lot of raw emotion, courage to survive, and the ability to overcome physical abuse from the owners. Many people in the sold-out audience couldn’t believe how far they stretched the abuse scenes, but director Scott McQueen made them as life-like as possible. The movie’s plot probably doesn’t cover everything Solomon experienced in 12 years, but the film’s length is way too long. The only repetitive part in the whole story is the whipping scenes, but at 2:14 minutes long, one would wonder when and how it will eventually end. Finally, I find it comical that Brad Pitt has about 10 minutes of screen time, but ultimately is the one character who saves the day.

This movie is worth the full price of admission, but make sure you are comfortable and have enough food because 12 years is long.