I need to take a moment and apologize to my followers and everyone who reads my reviews. After posting a review every day of the year, I had a bad week last week on a personal level and haven’t posted a new review since last Monday. I was aiming to review a movie a day in 2014 and even though I didn’t reach that goal, there are still plenty of days left and I can always aim for 365 reviews in 2015! Thank you everyone for supporting me as I struggled through last week and move forward to bigger and better things.

I choose today’s review because I own it on Blu-Ray and finally got around to watching 12 Rounds 2: Reloaded this past weekend on Netflix. I figured before I reviewed that movie I had to first review the original movie in the series. 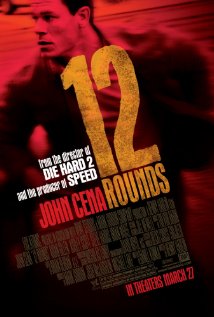 International criminal Miles Jackson (Aidan Gillen) is in New Orleans after breaking out of prison and about to settle an old score with someone when the FBI bust up the party and Miles flees with the aid of his girlfriend Erica (Taylor Cole). Danny and his partner Hank Carver (Brian White) are on patrol when they spot the getaway car and chase it down. After an accident brings the chase to end, Erica is run over by an unsuspecting truck which leaves Miles crying in the middle of the road. Danny arrests him before the FBI comes to pick him up.

Exactly one year later to the date of Erica’s death, Miles breaks out of prison and kidnaps Molly. He calls Danny to tell him that if he wants to save Molly’s life, he must play a game that will be 12 rounds long. If he is successful he will save the day and see wife again. Round one is a phone call followed by Danny’s house getting blown up. Now that the game has officially started, Miles prevents any communication between Danny and Molly so she is grabbed on the ferry to work. When Miles calls back he tells Danny to go back to the scene where they firts met for the next clue, so Danny recruits Hank into the game and the pair to make it to Round 4 and 5. Their next task is to locate two safety deposit boxes in a burning New Orleans Savings and Loan, one has a bomb, the other has the next clue. Danny borrows his brother’s fire engine and drives frantically through the city to throw one of the boxes into the river before it goes off.

By this point of the game, the FBI has learnt of Miles prison escape and that he has kidnapped Danny’s wife so they join in on the chase to catch him. Round 6 begins when Danny finds a hotel room key so the group heads over there to find out that Miles was recently there with Molly. Danny gets stuck in an elevator where he must save the life of the hotel worker named Willie. When a bomb goes off and the elevator plummets to the basement, Danny gets a clue for Round 7. Miles leads Danny to a bus stop where he needs to get onto the next bus where he has a face to face meeting with Molly, only problem is she has a bomb attached to her chest and Miles has his finger on the trigger. Miles explains why he is doing what he is doing, while the FBI sets up a sniper to end this game at the next set of lights. Danny gets the clue to the next round, which is just a cell phone number, so Hank goes back to the office to trace the number. Danny takes off with one of the FBI guys, Agent Santiago (Gonzalo Menendez) and they chase down a runaway streetcar which has lost its brakes when Danny called the number he got on the bus.

The streetcar manages to destroy a whole neighborhood block before coming to a halt, Miles calls and tells Danny now Molly’s bomb can only be deactivated by his finger print, and that the clue for Round 11  is at his dead girlfriend’s gravesite. On the way to the cemetery, Danny, Santiago, and Agent Aiken (Steve Harris) begin to the put together the clues from all the rounds and how Danny needed to perform a specific task throughout the day. Danny slams on the brakes when he realizes that Miles had another plan and was simply using him as a distraction to pull off the perfect crime somewhere else in the city.

my thoughts: John Cena made his big screen debut a few years prior in the Marine, which portrayed him as a rugged tough guy who could kick anyone’s ass. In 12 Rounds he is a rugged and mentally strong cop who survives each test Miles puts him through and has enough left in the tank to potentially foil the crime. Cena is a great wrestling performer who should get more creditability for his acting skills. What I like most about his performance in 12 Rounds is his determination to rescue Molly while playing the craziest game of his life. He survives several explosions and other life threatening situations just continue to on to the next round. He fights with the FBI who just want to capture Miles without saving Molly, but Danny is so stubborn that he will take on each challenge all by himself. My favorite part of the movie is when Danny is driving the fire truck recklessly across town at high speeds, sirens blaring, and destroying every car in his path.

Any smart person will know the outcome of this movie, which makes it extremely predictable, but that can’t take away from the fact this is a very creative plot and each round throws something at us that we are not expecting. The movie moves at a very fast pace that keeps you on the edge of your seat while Danny overcomes the odds each time and gets up for the next round. Even though it has some not so special effects, the stuns performed throughout the movie are crazy, which reminds us that this is a B level action thriller.

This movie used to be on Netflix, not sure if it is anymore, but this is worth at a one time watch for some fun and excitement.