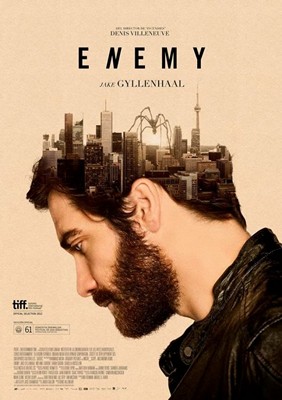 movie summary: University history teacher Adam Bell (Jake Gyllenhaal) is about to turn his life upside when he takes the advise of a fellow teacher to rent a movie.

Adam lives a very boring life in Toronto, his daily routine consists of getting up, taking public transit to work, coming home, grading school papers, sleeping with girlfriend Mary (Melanie Laurent), and then pissing her off that she leaves and he ends up alone. He spends most of his class time discussing ancient civilizations, their greedy rulers, and their quest for power in a totalitarianism society.

One day during a break in classes, Adam is reading in the teacher’s lounge when an associate teacher asks him what he does to unwind and if he ever watches movies. Adam tries to blow the guy off but he insists on telling him about this one movie he saw recently that he wanted to recommend. Shortly after the conversation Adam is walking home when he passes by a video rental store where he picks out the copy of the earlier recommended movie. When his girlfriend goes to bed that night he stays up and watches the movie, only to realize that the bell boy in the film looks exactly like him, minus the scruffy beard. He is half asleep and doesn’t believe what he saw. The next day Adam goes to class and is so distracted by what he saw he spends the afternoon looking through the film credits and researching the actor’s name, Anthony St. Claire. It appears Anthony is no superstar actor having only appeared in a total of three films, but Adam rushes to the video store to find the other movies to watch his double.

On the weekend Adam steps up his investigation to find the agency that hired Anthony before going to their offices to get his contact information. Adam is greeted by the security guard who thinks he’s Anthony in character, so gives him the letter that was left for Anthony at the front desk. Adam runs outside to his car to read the address before driving to Anthony’s apartment building. Outside the building Adam calls up only to get Anthony’s wife Helen (Sarah Gadon) on the phone. She recognizes the voice and tells Adam to stop acting crazy and come home. Adam tries to explain he’s looking for Anthony but she gets upset and hangs up. Determined to talk to his double Adam calls again after a few days, this time Anthony answers and tells him that he’s crazy and to never call again. A few minutes after being hung up on again Adam convinces Anthony to meet so he can see they are identical.

Helen believes Anthony is cheating on her again so she goes through his pockets and finds Adam’s information. She goes to the University where she meets Adam outside, he is sitting on a park bench and doesn’t know who she is while asking how far along she is in her pregnancy. Helen breaks down crying because she can’t believe what she has just experienced. When she returns home Anthony questions her on why she went into the city to meet a stranger. She explains that she thought Anthony was cheating on her again, and that she needed to be sure.

The next weekend Adam drives an hour outside of the city to meet Anthony at a hotel. The guys stand face to face to see they are identical in every way, from scars, hair style, and birthdays. Adam gets nervous about the situation and leaves. Anthony gets upset at how the situation went down so decides to seek revenge on Adam. He parks his motorcycle a block from Adam’s house and begins to stalk Mary and developed a sexual attraction to her. Anthony feels since Adam decided to involve Helen into the situation that he was going to involve Mary. The following Friday Anthony goes to Adam’s apartment and tells him they are switching clothes, identities, and women. Adam doesn’t like the decision but doesn’t have much of a choice. They swap everything while Anthony takes Mary out-of-town for a romantic getaway and Adam returns home to Helen.

After a few hours with each other’s new companions, the girls begin to realize that things are different and their man isn’t who he says he is. Mary discovers a wedding ring outline on Anthony’s finger while Helen asks Adam how school was. All four of them go to sleep in their respective places but when they wake up the drama unfolds and Adam and Anthony end up in a lot of trouble.

my thoughts: This review will be a first of its kind on my website, I am not going to give a number rating for this movie. Here’s why, I DON’T UNDERSTAND IT! Should anyone else have seen Enemy and want to explain it to me, please leave a reply down below. I think get the story but I also know I don’t get the story. I have my opinions on who Adam and Anthony are, but why does the spider com into the picture?? Why the spiders in the sex club? Why is Adam or Anthony AT the sex club? Why is there a giant spider walking over all the streets?? Why another giant size spider in the bedroom?? I have so many more questions than answers and amazingly I haven’t found a website on Google that explains this movie. If anyone researched the book “The Double” by Jose Saramago, the movie follows the storyline very closely but according to Wikipedia has a completely different ending.

My theory is Adam and Anthony are in fact the same person but with split personalities. There’s Adam, the nice guy side who has a wife and unborn child, while Anthony is the wanna be playboy who is trapped in his marriage so goes out and gets a girlfriend. Where the spider comes into all this puzzles me and leaves me without any real evidence on who is who and why they act the way they do.

Some people will get the point of this movie while some will be just as confused as me. These mixed feelings will not take away from the fact Jake Gyllenhaal is fantastic in this double identity role. He plays each character flawlessly and so convincingly that audiences will think they are in fact two completely different people. His supporting cast of women include Melanie Laurent, Sarah Gadon, and Isabella Rossellini who all excel at selling their part of the this tangled story with raw emotions.

Enemy has been given high marks across the board and was showcased at the Toronto International Film Festival where the majority of the movie was filmed. I’m going to recommend this movie to people based on the meaning of the story, even though I don’t quite get it, because the acting is worth a watch.