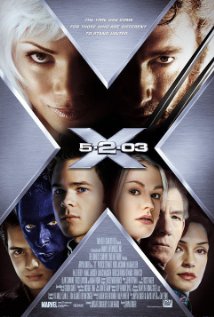 movie summary: After the events from the first X-Men movie, Magneto (Ian McKellen) is locked away in a plastic prison cell to prevent him from causing any further damage to himself or the world. The debate to lock up mutants and reveal their identities heats up even more after an assassination attempt on the US President. Unknown to Magneto, Professor Xavier (Patrick Stewart), and the rest of the country is that William Stryker (Brian Cox) is behind the attack. He’s a former government agent who wants to start a war between the mutants and get his hands on Cerebro.

Nightcrawler (Alan Cumming) manages to make his way into the Oval Office at the White House to spread his message about saving the mutant race. He leaves the President unharmed before escaping the firing squad. After these events unfold Professor Xavier uses Cerebro to track down Nightcrawler while Storm (Halle Barry) and Jean Grey (Famke Janssen) go grab him. Wolverine (Hugh Jackman) has spent time researching his past in Canada before returning to the school at the same time as everyone else. Professor Xavier suspects Magneto is behind the attack so he goes to pay his old friend a visit. Stryker apprehends both Professor Xavier and Cyclopes (James Marsden) in order to find out the location of the school so they can attack it and wipe out all the good mutants. Wolverine puts up a fight against Stryker’s mutants to allow Rogue (Anna Paquin) and the rest of the kids to escape, he then confronts Stryker who claims to know about his past. After the confrontation Rogue and the kids come back to rescue Wolverine while Stryker and his men hack into Cerebro.

Mystique (Rebecca Romijn) uses her impersonation abilities to gain access to Magneto’s cell so that she can orchestrate his release. Wolverine and the kids head to Boston where they get into trouble with the law only to be saved by the rest of the X-Men show up in the X-Jet. They are shot down by two fighter jets. Magneto shows up in time to prevent the jet from crashing to earth leaving the X-Men no choice but to agree to work with him to stop Stryker. Back at the school Professor Xavier is now under the command of Stryker and Cerebro, Stryker is using his son to lie to Xavier and get him to track and kill all mutants. Thanks to Jean’s ability to reads minds, she meets with Nightcrawler to figure out that Strkyer’s headquarters is inside a dam at Alkali Lake.

The X-Men board their X-Jet again and head to the Lake where Mystique disguises herself as Wolverine to get into the lab. Stryker is working on a second Celebro that will destroy all mutants. Once inside she changes back to herself and the rest of the X-Men crash the party with the plan to rescue the kidnapped students and destroy the second Cerebro. Their plan and actions work until their powers begin to destroy the foundation of the dam. After capturing Stryker, rescuing the students, and destroying the Cerebro the dam gives way and water begins to rush towards the X-Jet which will not start. The X-Men only have a few minutes to save themselves while being stuck in a busted ship.

my thoughts: This part of the review may disappoint all you X-Men lovers out there, but having re-watched X2 on Sunday I have to say I was extremely disappointed with it. I found X2 to be a tad bit boring and the story was not as great as the first film. There are action sequences but they are so far apart that I literally wanted to shut this movie off half way through.

The story about a corrupt government agent turning into a mutant bounty hunter is not the greatest plotline to keep fans entertained, especially in a X-Men movie. The messed up part of the movie is the bad guy of the whole series isn’t even the bad guy in the film! I understand sometimes the good guys needs to team up with the bad guys to pool their resources take out a new bad guy but this time around it wasn’t overly eventful. I get that the plot of this movie was about the mutants fighting to protect themselves but didn’t we see this happen in the first movie? In other superhero movies there is always a different story to tell with different bad guys trying to destory something different. This was almost the same story from the first movie except they are not saving the world.

I may be a little more judgemental towards this movie but sorry this didn’t work for me at all. I won’t knock the actors and actresses in the film, they all excel in their roles given the fact they are mutants with super powers. Wolverine is always the leader of the group given his power, capabilities, and attitude. The others like Jean, Storm, and Cyclopes kinda blend together with no one sticking out more than the other. In this second movie the X-Men group get an infusion of teenage mutants when Rogue falls in love with a guy who turns everything to ice and his brother who throws fireballs. The X-Men would be nothing without the smart and brave Professor Xavier, while no good guys would be complete without the bad guys Magneto and his sexy sidekick Mystique. Brian Cox plays a great sly and ruthless Stryker, but he really isn’t a threat considering he’s just a human with no special powers. His military forces are really no match for the best group of super humans on the planet.