movie summary: The X-men are a group of mutants with super human powers that band together to fight for injustice and for protection of their kind. In the early part of the 20th century mutants stayed in the shadows for fear people would kill them for having special powers. Professor Charles Xavier (James McAvoy) is studying at Oxford when he dreams of a world filled with mutants who can control their powers and work with humans to make the best things in life even better. He gets recruited by the CIA to use his mutant powers in an attempt to track down Sebastian Shaw (Kevin Bacon), an evil mutant who has plans to start a nuclear war between Russia and the United States during the Cuban Missile Crisis.

Xavier meets a girl named Raven (Jennifer Lawrence) at a young age and two grow together and become inseparable. He accepts the fact that she has the ability to transform into anyone she wants while being blue with orange hair in her real mutant form. While they are out celebrating their graduation the pair are approached by CIA Agent Moira MacTaggert (Rose Byrne) who wants to talk to him about mutants and their abilities. She recently witnessed an incident involving Shaw and Emma Frost (January Jones) who made a man disappear into thin hair. All of her superiors at the agency think she is crazy, but she is determined to prove them wrong. Xavier and Raven fly to Washington, DC where they meet the director who doesn’t believe a word of Xavier’s speech until Raven mutates into him and then back to herself. After witnessing the fact mutants are real, he acts swiftly to plan an attack on Shaw and prevent him from causing another world war.

When the coast guard boats approach Shaw’s yacht Xavier tries to read Shaw’s mind but he can not, instead he picks up on another mutant’s thoughts. Eric Lensherr (Michael Fassbender) has been chasing Shaw since he was a kid when Shaw killed his mother in an attempt to get Eric to unleash his powers. Eric has magnetic skills to move medal objects or conform them to anything he wants. Shaw gets away when the attack fails but Eric chases after him until Xavier steps in and stops him. The two form a friendship based on tracking down Shaw and learning to control their powers. The small crew return to Washington where they are introduced to Hank McCoy (Nicholas Hoult) who is a mutant in disguise at the agency who builds weapons and jets. Hank has a machine that has never been tested but was built to help him find other mutants across the globe. Since Hank doesn’t have telepathic abilities like Xavier, he’s never used the machine yet.

Shaw takes his submarine to the Arctic where he begins to set his plans in motion. Frost goes to meet with the Russians to fuel the fire about the US arming missiles in Turkey. As the world prepares for war, Xavier has moved his team to upstate New York where they can learn to master their skills in a safe environment. Hank meanwhile uses his spare time to come up with an antibiotic to cure the mutant gene and turn him back to being a human. Unfortunately his plan backfires and he turns into a huge blue haired beast. The team doesn’t have much time to react to his experiment gone bad because US naval ships have formed a blockade off the coast of Cuba. Shaw is headed to the blockade to ignite the war he so desperately craves. Eric and Xavier have become best friends during their training and are the official leaders of these mutants who will try to save the world from nuclear disaster.

When they reach the blockade the mutants try everything in their power to prevent the ships from firing on each other, Eric uses his magnetic abilities to rip Shaw’s submarine out of the water. While the sub is in the air, Riptide (Alex Gonzalez) creates a storm that crashes the plane and the sub on the beach. Eric rushes into the submarine to attack and kill Shaw while Xavier tries his best to control the minds of everyone on the naval destroyers so that they don’t fire on the island. Eric walks out of the ship wearing Shaw’s protective metallic helmet which Xavier begs him to take off so they can share their thoughts and end this disaster. Eric refuses and the two battle while the ships on the sea launch an all out missile attack on the island. 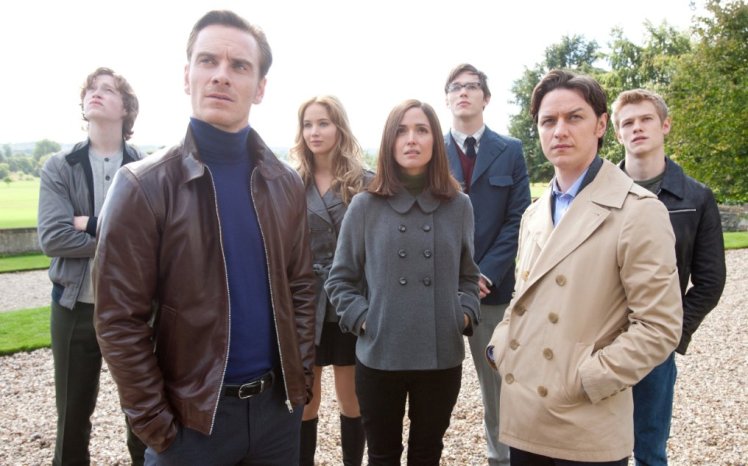 my thoughts: Like everyone else who has a movie review blog I spent the last few days watching and reviewing X-Men movies in anticipation of tonight’s new X-Men movie release. I’ve pointed out that the first movie was really good, the second one disappointed me, and that I really liked the third one. X-Men: First Class takes a step back to introduce us to the cast of characters and how they came to be, which makes it by far the best movie in the X-Men series.

I enjoyed First Class because it had excellent story telling, a really evil bad guy, and great chemistry amongst the characters, with a believable plot similar to ones you see in the Transformers movies. Sadly there are a few drawbacks to this film as well. This movie came out before Jennifer Lawrence was Jennifer Lawrence of today and she was totally under-utilized in her role while hanging out with some other not so awesome mutants. I didn’t like the mutant who adapted to survive or the one who could fly, but the best mutant in the whole movie was the one who didn’t even want to be one! I didn’t like Hank as the geeky scientist guy, but when he turns into the bad-ass Beast, well that’s a character I would support in any movie. Professor Xavier really didn’t do anything to showcase how he got his powers or learned how to control them, but it was intriguing to watch Eric turn from a hot-headed guy out for revenge into a smart and cunning guy who now plans how to get revenge. Deep down he wants to do the right thing, but he would never have turned into Magneto if it wasn’t for the training and experiences he went through that allow him to become a better villain for later movies. Speaking of bad guys, Kevin Bacon excels as Sebastian Shaw, the evil guy who wants to take over the world, even though he isn’t really likeable. He surrounds himself with a mutant who can teleport and create storms, but even Emma Frost is a much better character then he is and all she does is reads minds and turn to ice as protective shield. People who root for the bad guy in movies will root for Shaw to succeed but be happy when he doesn’t because someone else could do a much better job.

Prequels are always tough and sometimes even tougher to make than sequels. The storyline along with the characters have already been laid out before us in the franchise, so writing a prequel is stressful because the story needs to be accurate and meaningful. I am not a huge fan of the X-Men series but First Class gives me the right amount of history on each character that I can fully understand their roles and importance to the story in the other movies. Sadly for people who were expecting to see Rogue, Storm, Jean Gray/Phoenix, or Cyclopes, those characters were not around during the first incarnation of the X-Men, but as we all know join the group and play significant roles later on. The best part of this movie features a cameo of an X-Men who has a stiff attitude and a long history to figure out. His only line in the movie will have you bursting out laughing and wish he was in more of the movie.

Early review indicate that X-Men Days of Future’s Past is the best X-Men movie of all-time, but until I see it later tonight, I am going so say First Class, even with its flaws, is the best movie of the franchise to date.