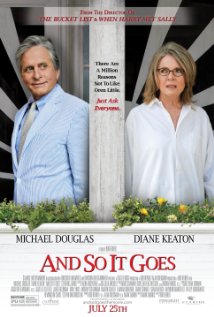 movie summary: Oren Little (Michael Douglas) is a bitter old man who is looking to sell one more house and retire with the commission. He loves the way his life is and wouldn’t have it any other way. He lives in the bottom apartment of the building he owns and his tenants hate him and threaten to report him to the manager. When he comes home he parks his fancy antique car in two spots and demands quiet in the building as soon as it gets dark out. His neighbor Leah (Diane Keaton) tries to be friendly but Oren blows her every time they interact. Everything is running smoothly for Oren until his estranged son Luke (Scott Shepard) drops by an open house to inform his dad he’s going to prison and needs someone to care for his 9-year-old daughter Sarah (Sterling Jerins).

Frustrated and upset Oren refuses to care for the grand-daughter he never knew he had until Luke drops her off at his front door and drives away. Leah just happens to be watering her flowers and watches the whole event take place. Poor Sarah is left crying so Leah offers to take her in for some ice cream which allows Oren to dump the kid and leave for the day vowing to return with a solution. The day goes by and Oren vents his frustrations at work to his secretary Claire (Frances Sternhagen). Oren thinks the best solution to the problem is to find Sarah’s mom and dump her at her mom’s place. When Oren returns home really late Leah flips on him because Sarah is passed out and he hasn’t come up with a solution to the situation yet.

Over the next few days Sarah spends time with Leah while Oren goes to work and spend the afternoon looking for Sarah’s mom. Every other night Oren allows Sarah to spend time at his place to make peanut butter sandwiches, watch Duck Destiny, and sleep over. Leah notices a change in Oren’s attitude and personality thinking that Sarah is having a positive influence on him so she finally lets her guard down and opens up to him. He comes home drunk one night where he stumbles onto her porch to eat some food she prepared, they begin talking about their past marriages and how they both their significant other to cancer. Oren gets all worked up and snaps at Leah when she mentions his wife causing their nice night to come to an abrupt end.

After some tough research and the help of the police, Oren finds Sarah’s mom and arranges for Sarah to be dropped off on her birthday. Sarah is scared to meet her mom for the first time so Leah tags along for what turns out to be a disaster trip to the projects. Sarah’s mom is a junkie who is in no state of mind to raise a kid. Oren pulls Sarah back to car and takes her away. Since it’s Sarah’s birthday he promises to take his granddaughter and Leah to the carnival where the three of them have a blast. When the night rolls around Sarah crashes early from having fun all day leaving the grown ups to crack open a bottle of wine and let the night get a little carried away. The next morning Oren bolts out of Leah’s apartment and ducks for cover in his place, it’s clear the night went further then either expected and their friendship is now more complicated than ever.

Oren tries his best to fix the situation by finding Leah a new singing gig but the damage of that morning may be too much for even him to over come. He has turned into a better person while falling in love with Leah and making Sarah the number one priority in his life, but will these changes be enough to salvage all the great things he now has in his life. 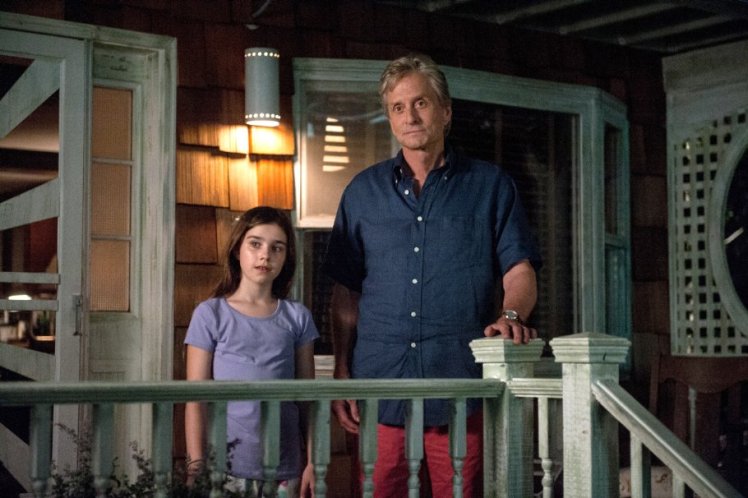 my thoughts: Times are tough in Hollywood these days for such legendary people like Michael Douglas and Diane Keaton. I knew going into this movie that the story and acting would be terrible and it didn’t disappoint on both those levels. I love Michael Douglas and even though his last few movies have been horrible and not really worth watching, I gave this movie a chance. He is really funny as the old stubborn real estate agent who just wants to retire and move on with his life. Douglas just has this charm about him that even when he only cares about himself he still can convince the audience that he’s a nice guy and people get behind him. Anyone who watches movies knew exactly what was going to happen from start to finish with his character but it was entertaining to watch the stubborn Oren transform into a loving and caring grand father who does a complete 360 personality turn.

His counter part Keaton must not have a lot of work coming her way because she took this role and I don’t understand why. She plays the very depressed and heartbroken night club singer who lost her husband. As great as she is as the “grandmother” figure in Sarah’s life, she makes a horrible romantic partner because she refuses to move on from her dead husband. Instead of turning bitter like Oren, she just cries herself to sleep every night clinging to a memory that has long been forgotten. When the opportunity for romance comes up again she freaks out and ends up ruining something potentially great. According to her IMDb page she’s only been in one movie a year for the last few years and it’s sad that this will be her only movie in 2014 because of how bad it is.

Director Rob Reiner makes several appearances in the movie as Leah’s piano player but doesn’t really factor into the story. Sad to see him reduced to such a small role in his own movie that is a far cry from Stand By Me, When Harry Met Sally, A Few Good Men, and The American President. I can understand that Hollywood has changed over the last few decades and no one appreciates heartfelt stories like they used to but the people associated with this project could have done so much better.

my final thoughts: And So It Goes is a movie that will be enjoyed by a much older audience who grew up watching Douglas and Keaton work their magic back in the day. I’m surprised the movie was released across the country in theatres when it should have gone straight to video on-demand. Younger movie goers should avoid this movie at all costs.