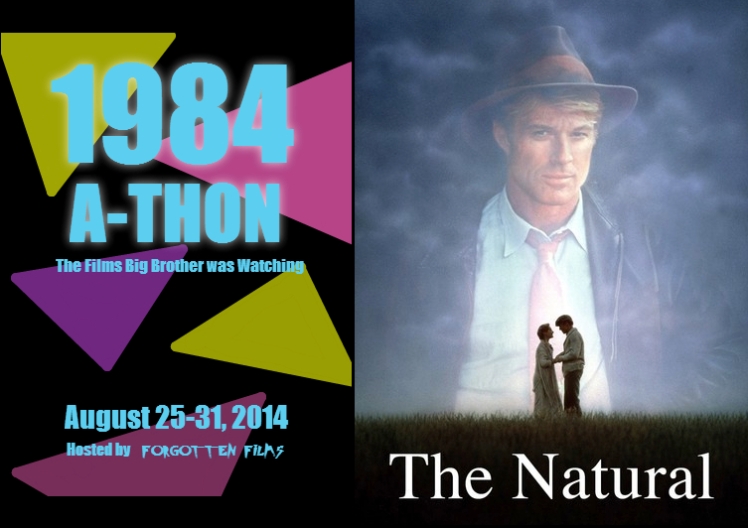 movie summary: The majority of little boys in America grew up playing the great game of baseball. Lots of those kids either learned how to throw the ball with velocity and accuracy or spent time working on their swing to hit the all mighty home run. Roy Hobbs (Robert Redford/Paul Sullivan Jr.) could do it all. He would spend his afternoons with his dad learning the fine art of pitching and when he wasn’t throwing, he was hitting them all over the field. Things take a turn for the worse when Roy’s dad has a heart attack chopping wood by a huge tree in the yard. Later that night a lightning bolt splits the tree in half allowing for Roy to cut up the wood and shave a piece down into a bat he calls “Wonder Boy.”

After years of practice, Roy finally gets a call to go try out for a professional team. His agent introduces him to a train full of players including the game’s biggest star “The Whammer” (Joe Don Baker) and sports reporter Max Mercy (Robert Duvall). The Whammer laughs Roy off thinking he’d be no match for him so Roy’s agent lays down a bet for The Whammer and Max. Roy strikes out the game’s best hitter with only three pitches winning a $10 bet and catching the eye of a beautiful stranger in the crowd. She stalks Roy on the train where he proclaims he wants to be the best player to ever play the game.

The pair meet again at the hotel before Roy is taken away from the game for 16 years. One day at Knights Field in New York City, Pop Fisher (Wilford Brimley) is watching his team struggle through another practice. He’s been the manager of the Knights for many years and even owns a stock in the team. Unfortunately the Knights have never had a winning season, let alone a chance at the World Series. Roy enters the club house, now in his mid to late 30s, to introduce himself as the Knight’s newest player. Pop and his assistant manager Red Blow (Richard Farnsworth) refuse to believe their scout would sign a has been player. Pop doesn’t care for Roy’s contract, refusing to play him for weeks. At this point of his life Roy can’t stand the losing, the poor attitudes of the other players, and the fact he is not playing. He begins to bow out of club meetings, prayer services, and other team activities. Pop decides to send him down to the minors which leads to a huge argument and Roy finally getting his chance to showcase what he’s got.

In his first batting practice Roy smacks the ball all over the park to the delight of his teammates and managers. After All-Star right fielder Bump Bailey (Michael Madsen) crashes through a wall, Roy finally gets his chance to play every day. The Knights fortunes begin to turn around with Roy in the line up. Once last place team, they are now winning every game and threatening to be the number one team in all of baseball. The Judge (Robert Prosky), the guy owns the Knights, is pleased with the profits he’s finally making. He employs the very lovely Memo Paris (Kim Basinger) to date Roy and distract home enough to throw him off his game. The Judge doesn’t want a championship team because he could lose his majority ownership to Pop if they ever win the World Series. After weeks of dating Memo, the Knights and Roy go into a slump that drop them down in the standings. Roy refuses to believe that Memo is a bad luck charm even though he hasn’t registered a hit in games.

While on a trip in Chicago Roy is greeted by his best friend from back home, Iris Gaines (Glenn Close). She’s been following Roy’s career and is really happy to see him. They catch up and exchange life stories which seems to spark Roy’s playing on the field. He leads the charge as the Knights march back into playoff contention before an injury threatens to derail Roy’s career and life. While out partying one night with the guys and Memo, Roy has a drink that causes him to pass out and ends up in the hospital because an old wound from his teenage years was never fully taken care of and is now threatening to kill him. The team spends days and nights by Roy’s side as he recovers and hopes to play in the championship series to win one for Pop. The Judge offers Roy a handsome sum of money to avoid coming back, but Roy’s determination, good morals, and passion for the game will not let such a dirty old man ruin another’s man life. Roy toughens out his injury to come back for the final game of the series.

The Knights spend the majority of the game down 2-0 and the time off has really effected Roy’s timing at the plate. He doesn’t get a hit in any of his appearances and comes up in the bottom of the ninth with two runners on base and two outs. His injury is starting to bleed through his uniform. With all the strength he has left, Roy steps up to the plate one more time to play the hero or to go down swinging. 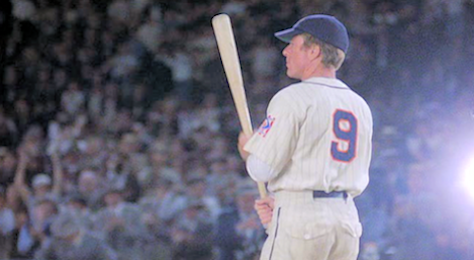 my thoughts: There are a lot of baseball movies out there. Most guys would pick Major League or Bull Durham, Field of Dreams or even Moneyball as the baseball movies ever, but they would all be wrong because The Natural is the best baseball movie ever made.

The Natural has everything anyone could want in a movie, let alone a sports movie. There’s all kinds of drama, heart-break, fun, baseball, and of course Robert Redford doing what he does best. Once in a while there comes a film where one would look at the lead role and be like that was written perfectly for a certain actor/actress, like they were meant to be that character. The part of Roy Hobbs fit Redford’s personality like a glove. He was 48 in real life when he picked up the bat and gave us one of cinema’s greatest sports endings. He was meant to play an old weary guy in his late 30’s clinging to a childhood dream of being a baseball player. Roy grew up on a farm and doesn’t have a college education like a lot of richer people did back then, but Roy has heart, dedication, and passion for everything he’s involved in. Those are the skills that can’t be taught in a locker room or at a practice, you are either born with them or you develop them through life experiences. His goal to be the greatest player who ever lived took a detour, for almost two decades, but the fire still burnt deeply inside him forcing him to get back on the field. His hard work earned him the right to play in the big leagues, his power earned him the spoils of the day, while he tried his best to move on from his past and life out his dream.

Lots of people have a past, some of them are filled with good stories while others are not as fortunate. Roy had everything going for him until one fateful night that would change the course of his destiny. Later on as an old man shows up to save the Knights, ace reporter Max spends the majority of the movie trying to figure out exactly where Roy has been hiding all these years. Max and Roy butt heads during his time in New York because Max is great at prying and doing his job. Just when things begin to look good for Roy, the team’s owner tries to bribe him not to play and his beautiful girlfriend uses him like he was the flavour of the month. Roy’s strong morals are no match for these corrupt people, but his dedication to winning the championship for Pop is a great part of the story.

One would think this movie is all about baseball, but there are so many sub stories and characters that there’s just about much as much entertainment off the field as there is on. There are not a lot of special effects for the movie or characters which allow it to feel more authentic. The movie is set in the 1940’s and does a great job representing that era in America. Back then before reality tv, Facebook, and Twitter, baseball was a game enjoyed around radios and by the local newspaper. The only way to know how your team did was either to be at the game or read about in the paper. The story cuts through many games at once but the audience does get a feeling of what’s it’s like to be around the New York Knights for a full season, a season with many ups and downs, heroes and scapegoats.

my final thoughts: The Natural came out two years after I was born and is still considered a classic 30 years later. Anyone who loves sports or the game of baseball has more than likely watched this movie once or twice. I own this movie because if I had the chance to play a movie character in a movie I would want to be Roy Hobbs. No one has ever hit a more magical home run in film history or in real life major league baseball. If the ending doesn’t send goosebumps down your spine then you may not really appreciate the dramatics of sports and what it’s like to be a hero.

A very special thank you to forgottenfilmcast.wordpress.com (@ForgottenFilmz) for letting me contribute to their 1984-a-thon showcasing great movies from one of cinema’s best years. It was an honour to discuss my favourite baseball movie with all of you!