movie summary: Football is a game loved by many people both young and old. Whether you live in a football city or visit one for games, you will know that people live and breathe the game. Everything is great when the team wins but when the boys end up on the wrong side of the scoreboard, everything falls apart. In southern California De La Salle High School is coached by the legendary Bob Ladouceur (Jim Caviezel). The Spartans are so good at football they have won a record 151 straights wins and 12 State Championships. When his son Danny (Matthew Daddario) enters his senior year the team is under a lot of pressure from everyone in the community to keep the streak alive. In some regards the streak has become more important than the game, players, and the fun of high school football.

In 2004 as the team begins to prepare for the upcoming season, everything begins to spiral out of control forcing these young adults to find the courage to come together and be strong for another. Coach Ladouceur has been a closet smoker for some time and despite spending years teaching and preaching perfect health for his players, suffers a heart attack. His sudden hospitalization sends shock waves through the locker room and the school where he works. No one can believe someone so respected would get so sick that he can’t coach the Spartans and keep the streak alive. Assistant coach Terry Eldson (Michael Chiklis) is tapped to take over the ruins of the team which has turned into a bunch of hot heads. A few junior players let their egos get in the way thinking they are the best players on the team and that they are better than any player during the streak, past or present. Fights begin to break out in practice and in the locker room leaving coach Eldson and coach Ladouceur shaking their heads in disgust. One of the team’s most likeable players, T.K. Kelly (Stephan James), is gunned down at a party. He had only showed up to give a cousin a ride. This emotion time brings the players together like never before because one of their best friends was gone. Even though he had just graduated the year before, he was destined to excel at the football program at Oregon State.

A few days after the funeral, coach Ladouceur is given clearance to return to his regular life, including coaching. The Spartans are so good that no team in southern California wants to play them which forces them to travel to Seattle where they lose their first game in almost 12 years. The community is left in shock again because the streak is over and they don’t know why. Parents and community members begin to question what’s wrong with the team and if coach Ladouceur is the guy to continue to lead the team. When the Spartans lose their second game in the row, the locker room breaks down emotionally arguing more than ever. In an attempt to get the guys to bond together again, the coaches organize an all day hang out at the veterans hospital where the kids will interact with wounded soldiers. The kids get an eye-opening experience and learn a whole new meaning to having a bad day.

The hospital visit turns things around for the team that marches back to the championship game. After defeating the #1 ranked team in the country, the Spartans start a whole new win streak en route to their 13th straight year in the finals. No one gave them a chance when they started the season at 0-2, but thanks to the outstanding play of running back Chris Ryan (Alexander Ludwig), the green and white returned to the big game to defend their title once again. Ryan has run his way into the record books and only remains a handful of touchdowns away from scoring the most touchdowns in the history of high school football. He’s under a lot of pressure from his dad Mickey (Clancy Brown) to break the record that will change his life forever, while coach Ladouceur is under a lot of pressure from the community to overcome all this adversity and lead his son and his teammates to one more title. 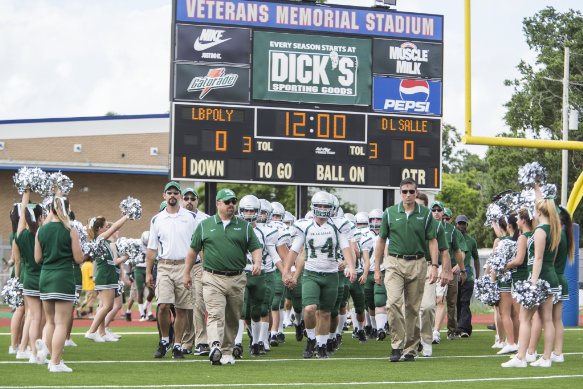 my thoughts: I can only assume that the majority of you who went to see When the Game Stands Tall actually knew what you were getting into, I did not. I love sports movies and football movies are always intense jammed pack with action and drama. When the Game Stands Tall has some action in it but actually isn’t about football or winning the big game, instead it is a human interest movie that focuses on Christian values, the human spirit, and doing the right thing. I was not expecting any of that and figured this was going to have the same tone as Varsity Blues. Instead this movie is not overly exciting, the football sequences are not awesome, while the story in between games is rather slow and boring. During this two-hour movie I found myself disinterested and waiting for the final game to finally take place so I could leave.

The movie is supposed to be about the De La Salle football team, but the story is more about Jim Caviezel’s character Bob Ladouceur. Football has meant everything to him, it’s meant so much that he has no real relationship with his son Danny, his daughter, or his wife Bev (Laura Dern). Danny complains that at the moment he needs him the most (senior year/starting wide receiver) his dad goes and gets hurt and might not coach. That’s the perfect example of how damaged their relationship really is, that his son is more concerned with his dad’s coaching abilities then the fact he just suffered a heart attack. At the end of the day football is just a game, but the Ladouceur family is just living proof that the game is more than just a game, that it’s a way a life, and in some aspects the only thing that matters. Bob spends the majority of the movie moping around speaking in monotone which led a buddy of mine to tell me he hated how Caviezel whispered the whole movie! He coaches without a play book or head set and just calls the plays that win games. He is a smart teacher, not just at school, but in the locker room, he knows exactly what to say and which button to push to motivate the kids to be perfect on every play.

There are a few sad parts of this movie that will highlight the struggles of being young football players who want to earn college scholarships or get recruited. Through out those heartbreaking moments something good always come out of them. A bunch of misfit football players will come together and mature into strong young men while enjoying some of the greatest days of their life. Being part of a team as a kid is a life changing experience, it allows for friendships that could last for a lifetime and while having the opportunity to learn the aspects of winning and losing. It’s not common for kids like the De La Salle players to have the added pressure of carrying a legacy that is 12 years in the making. That additional pressure will leave audiences feeling for these kids whether they win or lose.

my final thoughts: When the Game Stands Tall is a rather long sometimes boring look at the life of a high school football coach and his team. Just like every other sports movies ever made there are many high points and low points on the team’s journey to the top. Be prepare for a main character who is very one-dimensional with a soft monotone that will leave you disinterested in what he has to say off the field. My advice is to wait this movie out until it cycles out of the theatre, it’s not the full price of admission.