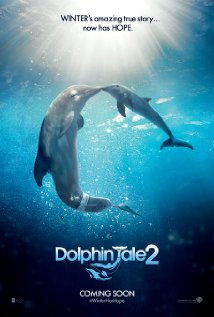 movie summary: The last time any of us saw Winter, the fin-less dolphin, on the big screen was back in 2011. In that heart warming true story, we met Dr. Clay Haskett (Harry Connick Jr.) who runs the Clearwater Marine Hospital in Florida. His treatment centre specializes in helping injured sea animals so they can return to the water. Sawyer Nelson (Nathan Gamble) finds Winter on the beach and gets her all the help she can through the marine hospital. He becomes best friends with Dr. Clay’s daughter Hazel (Cozi Zueflsdorff) and the pair work every day with Winter to get her back in shape without her tail. Dr. Cameron McCarthy (Morgan Freeman) drops by to introduce a rubber man-made fin for Winter so she can swim like a normal dolphin again. Together the group will launch Winter into superstardom and put the Clearwater Marine Hospital on the map, because of their one special fish that inspires hope.

In the years that passed since Winter’s discovery and rehab, the marine hospital has under gone a lot of changes and saved a lot of animals. Sawyer works side by side with Dr. Clay and Hazel to promote Winter’s extraordinary tale as well as be the lead tour guide for the centre. Winter has spent the last few years paired up with another rescued dolphin named Panama. Panama is old and has become very slow compared to the young and energetic Winter. Sawyer and Hazel go through the daily shows with both dolphins until one day Panama is found dead at the bottom of the pool. The centre is shut down for a few days while Panama is properly taken care, leaving Winter all alone with just Sawyer and Hazel.

Day by day Winter refuses to eat, do tricks, or even swim around the pool. She realizes that something is wrong and that Panama is no longer in the other pool. Sawyer and Hazel try their best to play with their favourite dolphin but Winter lashes out, injuring Sawyer’s hand and wrist. The government comes by for their yearly inspection and find many issues with the facility and the way it’s currently being run. The officer threatens to shut down the centre in 30 days if the building isn’t cleaned up and Winter if they don’t find Winter a new partner. Dolphins are not supposed to be alone, they swim in families and partner up for life. Since Panama has passed, Winter has been left all alone and will have to be relocated to Boston to live with other dolphins if a new mate isn’t found.

Dr. Clay has invested his whole life into the Marine Hospital and is about to lose his number one attraction along with his career. Sawyer meanwhile is approached by a marine school in the Northeast. They want to recruit him to spend a semester out at sea learning all that there is to know about marine biology, animals, and the water. Sawyer is still in high school but is unsure about taking this once in a lifetime opportunity because he only wants Winter to get better. His whole life is now about working at the centre with Winter, Hazel, and Dr. Clay, he doesn’t want to give up on it considering everything they have been through over the years.

As the days wind down to Winter’s departure, the marine hospital gets a call late one night about a stranded female dolphin. Dr. Clay and the rescue team spring into action to save the dolphin because she needs help and she could be the partner Winter has been looking for. When the tiny young dolphin arrives at the centre, people flock there to find out if they were about to witness a miracle. Hazel can’t believe the outpouring of love and support for Winter that she decides to call the new dolphin Hope. Days go by and Winter is still depressed but Hope is just a pool away getting better. Dr. Clay plans to rehab Hope until she is ready to be paired up and save the centre.

People from around the country come down to Florida to witness the first interaction between the dolphins. Everything is in place when the gates open, Hope doesn’t take to Winter because she doesn’t have a tale. Everyone associated with the centre and the dolphins is heartbroken things did not go according to plan. Sawyer and Hazel refuse to give up and ask Dr. McCarthy to help because they want to try the pairing one more time. It will be their last chance to save Winter, Hope, and the Clearwater Marine Hospital.

my thoughts: The Dolphin Tale movie back in 2011 was unique, special, and heart warming. I remember watching it at the theatre and wiping away a tear or two because I was rooting for the team to succeed and for Winter to make it. Fast forward a couple of years later and everyone’s favourite dolphin is in trouble again and needs help. Her team is willing to do almost any and everything to make sure she is happy, survives, and continues to serve as an inspiration to millions of people worldwide.

Winter is a real dolphin who really lost her tail. Anyone can go online to read her story and watch her on a 24 hour webcam. There was no real big surprise at the end of the first movie and there’s no shocking surprise here at the end of Dolphin Tale 2. These movies were made to showcase a story of overcoming adversity, overcoming the odds, and serve as an inspiration to millions of people who lost an arm or a leg. These movies are meant to be watched as a family, to have a few laughs, and wipe away a tear or two when everything works out in the end. This story really happened which leaves out no chance for a suspenseful or thrilling ending.

This movie really focuses on the human aspect of housing a handicapped but famous sea animal. Winter has suffered through a lot but so have her care takers. Dr. Clay stresses everyday to keep his dream medical centre up and running despite the money rolling in from the people who pay to see Winter. It’s an old building that needs some major TLC, but stays open for the people. Sawyer had no real direction or interest in life until he found an injured dolphin. That one dolphin would change his life forever and allow his to explore things he would have never imagined. He’s grown up and assumed major responsibilities and leadership roles that everyone around him takes notice of. Hazel was a loner and very sad after her mom passed away, but thanks to Sawyer and Winter she found something to be happy about again. Dr. Cameron McCarthy has been an inventor his whole life but never made anything of value until Sawyer finds him and they create the world’s most famous rubber fin. These are the people who have invested a lot of their personal time, blood, sweat, and tears into giving Winter the best life possible. Their hard work has paid off when people like Bethany Hamilton (playing herself) show up to the centre to become best friends with the tail-less dolphin.

I personally can’t imagine there is a need for Dolphin Tale 3, but Sawyer does have a whole semester of amazing things to experience out on the open waters. There could be a story there but the franchise would need a new title because the focus wouldn’t be on Winter. Sadly though, Winter will not live forever but her story will live on forever. New Dolphin Tale stories can focus on the marine centre, Hazel’s future, or another animal rescued by Dr. Clay and his staff. No matter what happens, this dolphin and her caretakers have changed people’s lives for the better, and that’s all you can ask for in a family film.

my final thoughts: Dolphin Tale 2 will be a hit with kids, young adults who understand the story, and adults who appreciate the story for what it is. Not everyone will shed a tear but everyone will leave the theatre with a smile on their face, whether they knew what was going to happen beforehand or not.