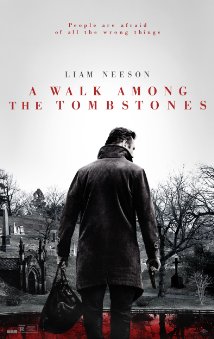 movie summary: Any cop in New York City has a tough job whether they are on duty or not. Matt Scudder (Liam Neeson) is one of the best cops on the force who works in a rough neighbourhood and doesn’t any crap from anyone. During his free time he likes to have a few shots at a local bar that allows cops to drink for free. One day the bar is held up and Matt hits the streets to shoot down the bad guys. The gun fight spills out into a public area where innocent bystanders get shot. Matt is responsible for these events and takes everything personally, forcing him to resign from the force and stop drinking.

Fast forward almost a decade and Matt is still doing police work, as a private detective, off the books for cash. One night after a AA meeting, Matt is approached to help track down the killers who was abducted a woman and cut up into pieces for a ransom. The killers targeted her husband Kenny (Dan Stevens) because he is a drug dealer who has loads of money. Matt isn’t interested in the job despite a cash advice of $10,000. Kenny goes on to tell the story of how wife was abducted and left in plastic bags, in the trunk of a car. Matt leaves and goes to the public library to do some research.

Inside the library Matt meets a young kid named TJ (Astro) who spends the majority of his nights in the library because he lives on the streets. Matt is not a computer savvy as TJ and is still looking through old newspaper articles on microfilm. He asks TJ for help to look up articles about women gone missing in the last few months. While the two go through the newspapers, Matt asks TJ questions about his life and offers to take him for a bite to eat after.

Through his research Matt has discovered there have been more abductions and murders much like the case he is investigating. He heads over to the cemetary the next day to talk to the groundskeeper who discovered trash bags filled with body parts in a pond. After questioning the groundskeeper and getting some inconsistent answers, he decides to tail him back to his place to find out he had a hand in abducting women. Before killing himself, the groundskeeper tells Matt that a guy named “Ray” (David Harbour) is in charge and that he has a partner.

Matt begins to search for clues related to other woman disappearances only to run into some trouble with some guys who don’t like him prying around. Walking home after getting beat with a baseball bat, Matt runs into Kenny’s brother who says that another friend of theirs had their daughter kidnapped and the bad guys want a ransom. They all believe it’s the same group of guys who killed Kenny’s wife, so Matt decides to take control of the situation and get on the phone when Ray calls. The two exchange stories before Matt informs Ray that he will play his game, but it will be by his rules.

The parties agree to an exchange of money for a live daughter. When the drop doesn’t go according to plan a gun fight breaks out in the cemetary causing a few people to get injured and Ray and his partner to get away in their van. Kenny is furious they got away and insists on pursing them to their hideout to end everything once and for all, while extracting revenge for his wife’s murder. 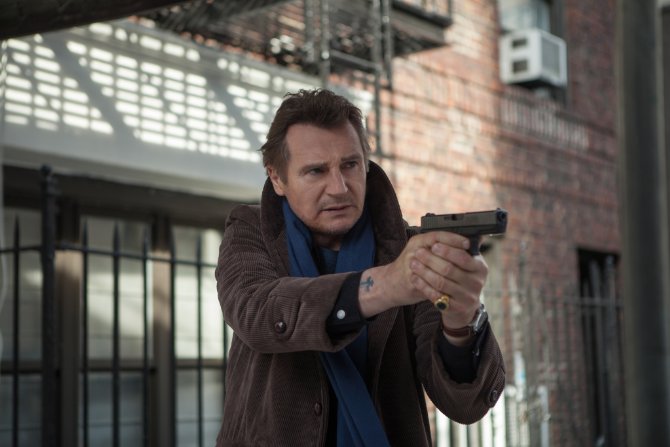 my thoughts: For the third week in a row the movie I was dying to see the most really disappointed. When the trailer for A Walk Among the Tombstones came out I thought this movie would be a combination of Taken and Gone Girl. Woman goes missing, Liam Neeson is hired, he kicks everyone’s ass, and saves the day. Instead of getting the Liam Neeson/Brian Mills we have come to know, we get the watered down recovering alcoholic Neeson who doesn’t care whether he survives the night or not.

The trailer is kind of misleading because there’s hardly any action in this movie. There’s the beginning gun fight and the ending gun fight, what is left is a really slow-paced cat and mouse game that is very graphic, disturbing, and boring. I understand this movie is not about the action, violence, or anything of that nature, but instead focuses on storytelling and playing the game. I guess a part of me wanted to see Neeson walking the streets and killing anyone who got in his way just like all the roles we’ve come to know him as.

My expectations may have been high for this movie, and I may have had a vision of his character that wasn’t met which explains why I didn’t like this movie. The story was extremely slow-paced and boring. It was hard to keep interested in Neeson’s work because he is not up to the times with technology and still uses old techniques to get results.

The bad guys in the movie are extremely dangerous and the worse kind of people you would ever want to cross paths with. They are evil people who kill for pure joy and excitement. They are sly, cunning, and plan out every possible detail to avoid capture. Never would they expect to mess up and meet with Matt Scudder but they do and are not prepared such a clash. They can hide behind their pay phones, videos, and newly painted vans but when the moment comes for them to back up their evil doings, they are not equipped. Their cowardness at the end makes them look extremely vulnerable and undoes their character through out the entire film.

my final thoughts: A Walk Among the Tombstones is a very graphic movie about the abduction of women and the sick people behind such crimes. Liam Neeson gives another strong performance with a gun despite not giving us a new character we haven’t seen before. You’d happy to save yourself $13.25 and skip this long dragged out boring cat and mouse game, or go see something else that is currently playing. My advice is to wait and watch this at home someday.