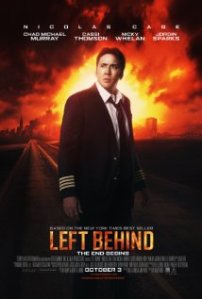 movie summary: Rayford Steele (Nicholas Cage) is just your average pilot who has two wonderful kids and a beautiful wife. Irene Steele (Lea Thompson) is a housewife, she spends her days tending to chores around the house and then reads the Bible every night. Their daughter Chloe (Cassi Thomson) is off in college in California and rarely comes home because since her mom has started to go to church, she tries to talk about the Bible and Jesus to everyone in the family.

Rayford tries to take as many flights as he can to get out of the house. In his spare time in the air he has manages to hook up with a beautiful flight attendant named Hattie Durham (Nicky Whalen). Chloe comes home to meet her dad at the airport to surprise him for his birthday. While waiting at the coffee shop she sees her dad with Hattie and is disgusted. News reporter Buck Williams (Chad Michael Murray) sees how upset she is and approaches her to buy her a coffee. After sharing a brief chat with her dad, Chloe leaves upset and sad that her dad lied to her face about flying to London and his relationship with Hattie. Buck puts a smile on her face but it will only last until she gets home and her mom tries to have “the talk” with her. Irene doesn’t mean to impose but believes that the end is coming and that Chloe should believe in God and be saved. Chloe grabs her little brother and decides to go to the mall.

After spending some time at the mall, something extremely strange happens. Every little kid suddenly disappears, old people are gone, and anyone who wore a cross on their necklace is gone. Hundreds upon thousands, maybe even millions people are gone. All over the world people are missing, including many on Rayford’s plane several thousand feet in the air. People are going crazy looking for their loved ones that seem to have vanished into thin air. Rayford’s co-pilot is gone so he requires Hattie and Buck to help him keep the people on the plane calm whether they figure things out. He searches for answers and finally figures out his co-pilot was a religious man and his missing flight attendant went to bible study. He puts everything together to realize that his wife was right all along.

Chloe watches her car get blown up in the parking lot so she needs to walk home in hopes of finding her mom and brother. Cell phones are now useless since there’s no reception anywhere in the city or in the air. Chloe makes her way across the city which has turned into a war zone thanks to looters, people armed with guns, and people mobbing the hospital. Planes begin to drop from the sky and Rayford’s plane clips the wings of one on its way down. His plane is now leaking fuel and he hasn’t been able to contact anyone on the radio. Buck meanwhile tries his best to keep other passengers calm despite one pulling a gun on the others. Cooler heads prevail when a girl on drugs explains that what happened is called the Rapture. She goes on to explain that people who believe in Jesus Christ have been taken to heaven and will not be around when everything goes bad on earth. People begin to realize that they are not religious and that this girl’s explanation makes sense. Some begin to pray while Rayford and Buck figure out how to land the plane that has run out of fuel and has a broken wing.

my thoughts: I’m a Christian and I have seen the original movies of the Left Behind series with Kirk Cameron. I may even own the first book in the series back home in a box somewhere. I heard that Hollywood was going to take the series and give it a make over with a new lead in Nicholas Cage. There was hardly any publicity for the movie and trailer was really bad which lowered my expectations of the film. Last Tuesday I caught Left Behind at the theatre and was thrilled I didn’t pay more than $7 because the movie was worse than I could have ever imagined.

Nicholas Cage doesn’t come across as a religious kind of guy, neither does Cassi Thomson or Chad Michael Murray. These three stars of the movie are really overshadowed by some of the passengers on the plane and people on the ground. The writers added a variety of characters to the story to play up the race and minority cards. Honestly I can’t think of a reason why the story spent so much time focusing on these minor characters and not on the real problem at hand.

God has just pulled away millions upon millions of people from earth with no explanation. The Rapture and God is rarely discussed throughout the rest of the movie. The story is more focused on events up in the air on a busted plane and Chloe’s refusal to believe in God. It’s tough not to compare both movies but this movie lacks any real connection to the Rapture and God. Sure God is mentioned a few times, there’s a couple of Bible scenes but by no means should this movie be considered religious or Christian. There really isn’t a clear message here except people don’t know what to do when the world they are used to changes in a flash. Everyone’s more eager to point fingers and place blame on other people then taking a moment to try to figure out what happened. They all want to take the easy way out to find the answers.

One other aspect of the film that drove me crazy was the Buck Williams character. The original Buck character was a gutsy reporter, a guy who was in the deserts of the middle east when it came under fire. He was there to witness a miracle first hand and was willing to risk his life to get the story. Chad Michael Murray’s character is none of those things. He’s just a guy who happened to be on the same plane as the lead character. He does zero news reporting and uses his camera to talk to people on the plane. If he doesn’t land he’ll never get those stories out which makes his character even weaker than the original version. He is more of a peacekeeper and co-pilot without any real experience in either role. As bad as the story was, these characters are just worse than anyone could have imagined and it really started with Buck.

This review was tough to write because the movie is so bad and is a disgrace to the original series. Those first three movies were not the greatest movies ever made but were more about the Rapture, trying to understand and comprehend it. This reboot, reimagining, or remake is more about the human problems when there’s no one around to provide answers. The story was predictable, boring, and very unrealistic. I have told a few people to avoid this movie at all costs and to remember Kirk Cameron and all his glory from 2000.

my final thoughts: If you have not gone to see Left Behind, please don’t. You’d be wasting your time and money on top of not learning a thing about the end times and the second coming of Jesus Christ. At least in the original we were given a glimpse of scripture and what was happening across the globe, not just in New York City and on one plane in a sky.