movie summary: The world needs some tender, love, and care before the future comes and this place begins to kill us all. In a future where the world’s most skilled people are living on farms to help feed the millions of starving people, humanity has taken several steps backwards in terms of inventing new things or exploring every corner of the universe. Then there’s Cooper (Matthew McConaughey), a farmer who was the best pilot in the US military and NASA. He trained his whole life on risk taking missions and was always successful until a crash grounded him permanently. Fast forward about seven years and his son Tom (Timothy Chalamet) and daughter Murphy (Mackenzie Foy) are growing up on the family farm while Cooper still dreams about the stars. While driving to school one day the family spot an old spy droid flying over the crops which Cooper hacks into and lands to examine it. This discovery will lead Cooper and Murphy to a secret hide away tucked away in the mountains many miles away.

When the pair reach a gate they are escorted at gun point to a secret room when Cooper comes face to face with an old friend, Professor Brand (Michael Caine). After a brief exchange of introductions the Professor explains to Cooper that the world as we know will not be around much longer and that a mission is being planned to explore a newly discovered black hole by the planet Saturn. Lead by his daughter Brand (Anne Hathaway), the mission will send up a space ship to search for the 12 missing astronauts who made it through the black hole and discovered a whole belt of new planets. The Professor explains that Cooper was always meant to fly this mission and it is his destiny to discover a new home to raise his kids on. Cooper is completely shocked at this whole project and doesn’t want to leave his kids because the journey to Saturn is 18 months. Murphy is really upset that her dad is considering going and fights him until the bitter end when he leaves without her saying good-bye.

Cooper and Brand leave Earth with Romilly (David Gyasi), Doyle (Wes Bentley), and a talking machine named TARS (Bill Irwin) on their journey to the furthest reaches of the galaxy. After taking a nap for the majority of their 18 month journey, the crew awake and plunge head first into the black hole to discover a whole new place filled with millions of stars and planets. Their main goal is to find any survivors amongst the 12 and find a planet that can sustain life. When the crew receive data that one of the 12 is alive, they disembark on a small ship to explore a planet made of water. Things get out of hand real quick and huge tidal waves cause damage to the ship but thankfully the crew manages to survive. They reached the base station again to find out they have been gone much longer than any of them could have ever imagined. Time isn’t on their side anymore because no one has ever survived inside a black hole long enough to report their findings back to earth and they are not getting any younger.

After surveying a few more planets, they realize that no one has survived. As time continues to fly by they debate between the final two planets because there won’t be enough fuel to get home and search both. Brand’s personal feelings get in the way of the mission which forces Cooper to make a decision that will cost the team dearly. The ship floats over to a planet that is completely covered in snow with 67 hour days and nights. To everyone’s surprise there is a living astronaut who has been sleeping in his tube for the last 50+ years. When he wakes up the group share trip experiences, data, and evaluate a new plan how to get home. Things go horribly wrong for the crew when they are out exploring the landscapes, forcing Cooper and Brand to act swiftly to secure their ship for the voyage home or be stuck in the black hole forever. When everything finally settles down again, the extra action has cost the crew a lot of fuel which means they need to drop some of their weight in order to start a trek home. Someone is going to have to step up and be a hero while the other will have to sacrifice themselves for the sake of humanity. 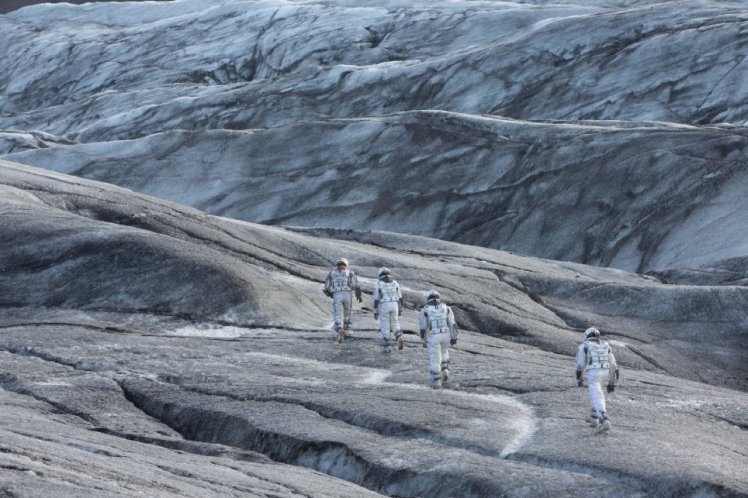 my thoughts: It is no secret I love every second of The Dark Knight franchise. Christopher Nolan brought the Batman character back to life with the help of Christian Bale, who gave audiences three amazing performances that rank among some of the best ever made in the super hero genre. On the other hand I haven’t always liked Nolan’s other work. Memento was dumb and made no sense, while The Prestige ended with a pleasant surprise. Then there’s the really confusing Inception, which I think was all a dream because the spinner toppled over at the end. His latest masterpiece Interstellar, is a thought defying sci-fi movie that is not supposed to be realistic but be more about entertaining us while his characters explore the deepest parts of their hearts and our universe. It got a lot of hype and rightfully so, Interstellar is one of the best movies of 2014 and of all-time. I’ve never seen 2001: A Space Odyssey but I have seen Star Wars and Star Trek and none of these can compare to this space/time travel film that will leave you on the edge of your seat from beginning to end.

Christopher Nolan has the ability to play with the audience’s emotions, knowledge of life, and space travel only to flip the story when we least expect it to keep us on pins and needles. Some people don’t like the fact the movie is long at 2:49, but it needs to be dragged out that long to throw in all the curveballs and keep us guessing until the screen cuts to blackness. There’s just so much to absorb in terms of story, scientific theory, and character development. I’d love to explain every detail to you so I can understand it again myself, but exposing the movie to you in this review would ruin so many critical plot twists and spoil your three-hour journey into outer space.

The majority of you know that the USS Enterprise travels to every dimension in our galaxy, but these guys can’t hold a candle to what Matthew McConaughey, Anne Hathaway, and Michael Caine go through to save humanity. Their journey may defy logic and theory but how much do we really know about what’s out there? The crew try their best to solve advanced math questions that even Matt Damon from Good Will Hunting would have a hard time figuring out. On top of the stress of leaving Earth knowing they may never come back, the psychological toll on their minds is more than almost any human being can sustain. McConaughey’s Cooper isn’t a character I got behind from the beginning, but he suffers the most in the film. One can never understand the drama, heartbreak, and stress he suffers on this journey, all to see his kids again one day. Meanwhile back on Earth his kids have grown up and all but moved on from waiting for him to come back. Jessica Chasten is great as the grown up Murphy character who refuses to give up on finding a solution to bring her dad back, while he floats around in a black hole hoping to set foot back on planet Earth. Casey Affleck plays his son Tom who gave up on a his dad a long time ago and struggles with the upkeep of the family farm. Murphy stays by the side of Professor Brand who is slowly dying with no real answer to solve’s the world’s worst problems and if he will see his daughter ever again.

Anne Hathaway carries her own weigh in and out of the space shuttle. The beautiful and talented actress is along for the ride to help create a colony of babies on a new planet and believes she holds the keys to human survival. The main focus of Interstellar may be about Cooper and Murphy, but Brand is a part of the glue that keeps them together, while her efforts push Cooper harder and further to turn this mission into a success and be a hero.

I went to see Interstellar Sunday night in AVX and had to agree with my buddy that this would have been an absolutely amazing experience in IMAX. The space shuttle launch and journey through the stars is breathtaking. Earth looks amazing from the outside cameras while the furthest away stars and planets take on life of their own as the space station floats on by. Not everyone is lucky enough to go into space to take in the sights, but if Nolan went to great extremes to portray everything in accurate detail, then you have a great idea of what may be out there. The concept of the black hole has always been talked about, but never been brought to life quite like this. The talk about time whether scientific or realistic is so confusing you don’t want to know exactly what it means, you just want to know enough and how it pertains to our characters and their journey. Some of you will be pissed with the way the story turns from not realistic to impossible at the end, but that turn is the whole foundation of this story about the connection between a dad and his daughter.

I forgot to add that Hans Zimmer provides us with another amazing score. His contributions to many Nolan films allow many of his ideas and characters to become more powerful and memorable.

my final thoughts: If you have a chance to catch Interstellar in IMAX, the full price of admission will be worth every penny. I’d recommend you find three hours of your life to watch some of Nolan’s best work as he reaches for the stars. None of the actors or actresses will win any awards but this movie needs to be considered a contender for Best Picture, on top of best editing, cinematography, and writing. Interstellar is hands down on of 2014’s best movies.