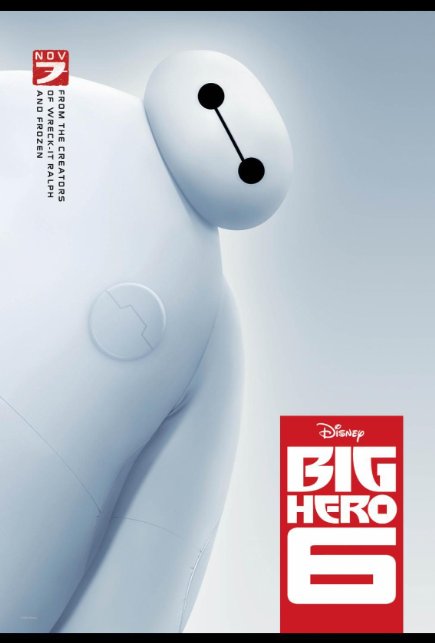 movie summary: In the futuristic city of San Fransokyo, there lives a boy wonder named Hiro Hamada (Ryan Potter). He is a genius at just the young age of 14. His greatest asset is his imagination and the ability to turn his dreams into reality. Like every teenager, Hiro finds many ways to get into trouble which include robot fighting, which is illegal. His brother Tadashi (Daniel Henney) doesn’t quite agree with this reckless lifestyle and encourages Hiro to apply to the college of advanced technologies so they go to school together. In an attempt to encourage Hiro to apply, Tadashi takes him to the school to meet all his friends and to see first hand his new robot Baymax (Scott Adsit).

This giant white balloon robot was created to help aid the sick and wounded. Tadashi’s goal is help the health care system for years to come. Baymax activates when someone gets injured or yells for help and can do a full body scan within seconds. This adorable inflatable robot will go above and beyond the standard regular care procedures and help anyone get better quickly. After feeling inspired to apply to the “nerd school” Hiro begins to work on his new invention for the prestigious Professor Callaghan (James Cromwell) science exhibit which almost guarantees entry to school if he wins 1st place. Hiro invents little microbots that spring to live with the use of some fancy head-gear and can take the shape of any design and perform any task. These bots can be used for transportation or a foundation for a building, which lands Hiro the top prize and express entry into the school. Things go from great to worse when there’s an explosion at the science exhibit and the microbots are destroyed.

Baymax survives the blast and is taken home when he sits in his case for weeks before Hiro stubs his toes and screams in agony. The loveable caretaker rises to aid Hiro who is shocked to see Baymax and doesn’t require his assistance. Baymax realizes Hiro is not happy and offers to help when he notices that his one and only remaining microbot is bouncing around trying to get out. Hiro thinks nothing of it but Baymax offers to take the microbot in the direction that it wants to go until it stops bouncing. The big white balloon robot makes his way across the busy streets of San Fransokyo to a dark warehouse where he discovers a huge machine producing thousands of microbots a minute. Hiro finally catches up to Baymax and is astonished with this discovery, until both are scared off by a guy in a mask who now controls the microbots.

Uncertain of what to do next, Baymax reads a spike in Hiro’s heart rate so he phones his friends GoGo Tomago (Jamie Chung), Wasabi (Damon Wayans Jr.), Honey Lemon (Genesis Rodriguez), and Fred (T.J. Miller). Hiro tries to explains what he and Baymax just witnessed and that this potentially evil/dangerous guy must be stopped. The gang thinks he’s crazy, while Baymax is just there, along for the ride being goofy and supportive to anyone who gets injured. Hiro returns to his garage to help build super suits for everyone and then turn Baymax into a lean mean fighting machine. After a few days of training at Fred’s house, the gang is prepared to hit the streets and air with their new suits to take on the bad guy in the mask. When they show up ready to fight at the grand opening of the new wing of the school, built by the wealthy Alistair Krei (Alan Tudyk), they unexpectedly run into the mask man and the millions of microbots. These mircobots now hold a teleporter device and is sucking up the school piece by piece, leaving Baymax and Hiro to be the ones to save the school and the people before it’s too late.

my thoughts: This was a 10 star movie for me. From the very beginning right up until the battle at the end, this was the funniest animated movie I had ever seen. On top of the all fun, I couldn’t remember the last time I cried twice during the same animated movie. Then the ending happened and my thoughts about this movie dropped to five stars. I was so angry with the way things went but understand why they did what they did. Luckily the movie saves itself, which made me happy, when the story ends and the credits roll. Big Hero 6 was an emotional rollercoaster that is both awesome, heartfelt, and hilarious.

The best part of this movie is Baymax, there’s no two ways about it. This loveable marshmallow looking robot will have you laughing out loud until you cry with all the silly things he does. He’s the most harmless robot ever created whose the main function to help and care. He has a real hard time blending in with society but that’s what make him so great! When Hiro is busy trying to reprogram Baymax and use him as a weapon of mass destruction, Baymax’s internal programming really doesn’t allow for such a change. He is Hiro’s best friend and together he will be by his side to take down any and everything that gets in their way.

The other main character of this movie is Hiro, the boy wonder. This kid could do anything in the world but spends the majority of the time being a rebel and then wants nothing more than revenge for past wrong doings. Hiro invented the microbot that could change the world but once his idea gets stolen by a guy seeking revenge for himself, Hiro will try everything he can to turn all things good into bad for his own benefit. After suffering the loss of his parents, he grows up in his aunt’s attic where he spends all his free time drawing and creating. He has a heart of gold, much like Baymax’s, but is programmed a little bit different. He doesn’t know how to deal with more pain and suffering which causes him to rebel and act different then everyone else. It will take a group of his brother’s friends to calm him down and see the world for how great it can be. It will also take the love and support of Baymax to finally change Hiro into a great kid with loads of potential.

Hiro’s group of friends is made up of all the classic personalities you would expect in a group of kids. Fred is the wild and crazy kid who just goes about life thinking everything is fun and never taking anything serious. There’s GoGo Tomago who is quick with her mind, hands, and feet which turns her into a lightning rod with her new suit and attachments. Honey Lemon is the girl who is always taking selfies, smiling, and loves all things colourful. She is one heck of a motivator because her sweet personality makes her everyone else support beam. Then finally there is Wasabi who sometimes acts like he’s scared of his own shadow, despite the fact he is extremely educated with lasers. Together this rag-tag group of nerds will bond together and put their educated powers to good use to save Hiro and Baymax from the trouble they get themselves into.

I thought using James Cromwell as the voice of Professor Callaghan was a fantastic choice based on similar roles he has played in other movies. He has that kind of voice that commands authority and respect on top of being someone you can trust. Whether or not he is someone you can actually trust is another story.

The build up to the ending was good and thoughtful. There is a couple of extra storylines thrown in to take your mind off of who you think the bad guy really is and then the big surprise is: it’s not who you think it is!

my final thoughts: The story compliments the amazing animation really well and this movie is filled with laughs from start to finish. Big Hero 6 will be a great movie to take the kids to and no one is going to get scared with the mask wearing bad guy. Baymax may be the most loveable animated character in history and after watching him be awesome for two hours, everyone is going to wish they had one. Since Baymax has yet to be created in real life, stop by your local theatre and enjoy his adventure on the big screen, because you won’t be disappointed and will never think of the fist bump the same way again.