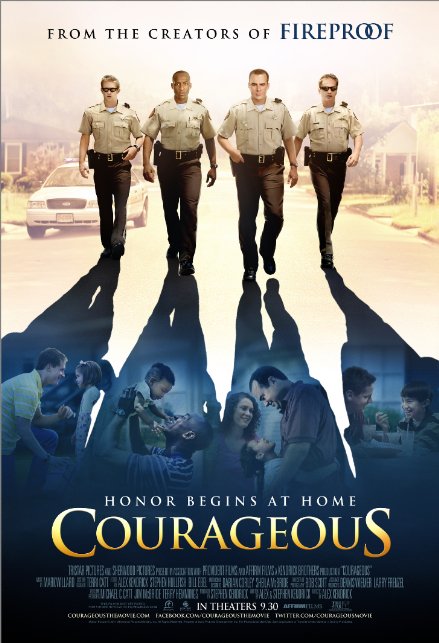 movie summary: Courageous opens in the small town of Albany Georgia. We first meet Nathan Hayes (Ken Bevel) who manages to prevent his brand new pick up truck from being stolen. When police officer Adam Mitchell (Alex Kendrick) and his partner Shane Fuller (Kevin Downes) show up to the scene, they discover that Nathan is going to be the new deputy at their department.

At the next officer meeting, the police chief gives a presentation about the importance of being an active parent in a kid’s life. Studies have shown that kids who feel neglected in their homes tend to get into trouble and make poor life decisions. Adam is married with two kids. He loves his daughter Emily (Lauren Etchells) more than anything but is not that close to his son Dylan (Rusty Martin) who loves running. Shane is divorced and is not an active parent because he only sees his son every other weekend. Nathan grew up in a broken home and has a few kids of his own, with one teenager who hates him because she’s not allowed to date. One of their rookie cop partners, David Thomson (Ben Davies), is a single guy but has a kid with his college sweetheart that he has all but abandoned and never met. These four guys are always at the top of their game at work, but haven’t been the best they can be at home with their families and their kids. The group gain a new friend when Javier Martinez (Robert Amaya), who is struggling to find employment, meets Adam by chance. After helping Adam build his garage, he agrees to help Javier land full-time employment down at the factory which pleases his wife and two children.

These guys work together everyday with and without their badges. When they are not fighting crime, they can be found hanging out in their back yards with the kids running around and food on the BBQ. Everything in life seems to be going smoothly until a series of events will push these guys to a place they have never been before. The first thing that happens is one of Adam’s kids is killed by a drunk driver. This event will tear his life apart and force him to re-evaluate everything that is important to him. Nathan’s daughter Jade (Taylor Hutcherson) decides she wants to date a guy who is part of a gang her dad has been trying to take down. Shane gets busted stealing drugs from the evidence locker to resell on the street to help supplement his police income. David begins to realize how horrible is it for his kid to grow up without a dad yet refuses to reach out to his ex and patch up their relationship. Javier meanwhile is up for a promotion at the warehouse, but the manager wants him to lie on shipping manifests to help the company’s bottom line.

As the guys suffer through these life altering events, Alex turns to the Bible for answers. He thinks the best course of action for everyone is to create and sign a resolution that they will honor God in every aspect of their life. When he approaches his best friends about it, they are all for it and set up a formal ceremony to sign their proclamations. Alex hopes that becoming a better person, father, and officer of the law, his leadership will rub off on everyone else as they struggle with their issues. The point of the resolution is to remind them that there will be many obstacles thrown in their path, but when they work together to hold each other accountable, they can become the people God intended them to be.

my thoughts: In 2011 I set out to watch 100 movies at the theatre. It was the first year I tried to accomplish that feat and went to see Courageous just because it was playing. I didn’t see a trailer for the movie and didn’t even know what the plot was about, except that it was a Christian movie. While I sat there for two hours and watched Courageous unfold before me, I wiped away a few tears, I laughed out loud, and left the theatre thankful that I had seen such an amazing movie.

Courageous is filled with some lame cop action sequences and predictable family drama, but is also filled with a lot of humour, heartbreak, and happiness. There are so many touching moments in regards to the realism of life and how sometimes it can be so cruel. Christians turn towards God and ask for his guidance in trouble times, which takes a lot of courage even for the most devoted ones. Everyone handles problems in their own way, some find solutions while others wait for solutions to come to them. Some people refuse to take responsibility for their actions which just leaves them the stuck in the same rut. There are some who refuse help because they don’t even realize that what they are doing is wrong. In the rare occasion it takes a life shattering event to make them realize the error of their ways and to finally man up to make a change or ask for help.

The whole movie is not about Bible versions and prayer like one would think. Instead there’s a good honest look into the lives of a variety of people who struggle everyday following God’s intentions. All the characters in the film are good people with a good head on their shoulders, who only want the best for their friends and family. Sometimes life happens and events begin people closer together like never before. It takes a strong person to be there to land a helping hand to a friend in a time of need, but it takes an even stronger man to follow the plan that God has laid out for them.

I feel like I got lost in the summary of my thoughts because it’s hard to describe how amazing and impactful this movie is. Some of you will roll your eyes at how corny the storylines and the cop chases are but this movie isn’t about all the special effects. Courageous is a funny and charming movie that delivers a deeper message you wouldn’t expect from a Christian movie. It doesn’t quote the bible the whole movie and let’s you go along for the journey of self-discovery that would be great for the whole family. Each character has something about them that draws you into their story and keeps you engaged throughout the whole film until the very end.

my final thoughts: Despite your religious beliefs or personal opinions, movie goers everywhere should take two hours out of their day to watch Courageous. Once you get over the fact this isn’t your regular cop movie, you’ll come to appreciate what the writers and director wanted you to find out about a group of guys who had the courage to change. There is not much to miss or pick apart in one of the best Christian movies I’ve ever seen.