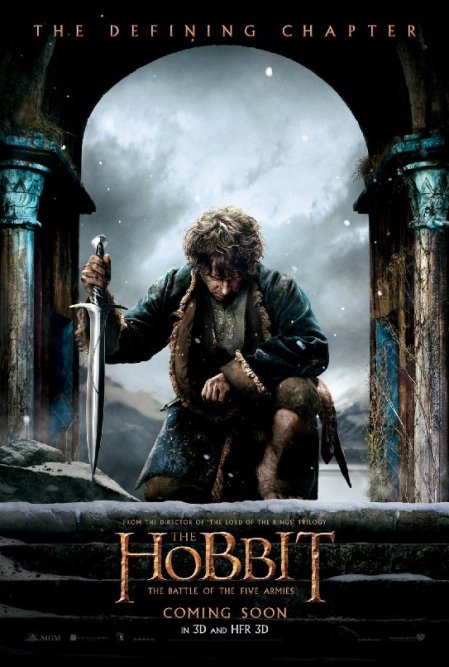 movie summary: The last time we saw Bilbo Baggins (Martin Freeman), Thorin Oakenshield (Richard Armitage), and Gandalf the Grey (Ian McKellen) they were outside Lonely Mountain, where Smaug the dragon had lived amongst the treasures of Middle Earth. Smaug has now broken free and is destroying Laketown with his fire-breathing flames. Bard (Luke Evans) was locked away in a prison cell before he was able to break free and put up a last-ditch effort to bring down the mighty dragon. When the smoke finally settles and the fires are put out, the people of Laketown appoint Bard as their new king while they turn their focus to Lonely Mountain where Thorin has barricaded himself in with the gold and dwarfs.

Gandalf is being held prisoner and is rescued by Galadriel (Cate Blanchett), Saruman (Christopher Lee), and Elrond (Hugo Weaving). He returns to Laketown to learn that Legolas (Orlando Bloom), Tauriel (Evangeline Lilly), and Thranduil (Lee Pace) have all marched the elf army to Dale, at the base of the mountain, to attack Thorin to share the riches amongst the people. Bard agrees to stand beside the elves in hopes that a huge showing of soldiers would scare Thorin into giving up the treasure. When he refuses both Thranduil and Bard return to the city to arm the thousand of elf soldiers for battle. Legolas and Tauriel take off into the mountains to find out that Azog has built up a massive Orc army and is descending upon the Lonely Mountain area to seek revenge on Thorin and steal the treasure for himself. En route, Azog sends some of his orcs down into the Earth to summon more creatures and giant bats to create a whole another division for the upcoming war.

Thorin meanwhile is not preparing for war but instead is searching through the million pieces of coins for an Arkenstone that is nowhere to be found. He under the influence of the gold and his attitude towards his own men has changed. When he finds out Bilbo took the Arkenstone he orders him to be killed before Gandalf is able to reason with him to come to his senses. Thorin orders his seven dwarfs to prepare for battle just when his cousin Dain shows up with a few hundred other dwarves, thus setting the stage for one epic battle for the mountain. Just when the fighting starts between the humans, dwarves, and elves begins, Azog’s army roars over the other mountain side to take the city where the Laketown people have set up camp.

Clearly outnumbered by the ugly creatures of the Orc army, Bilbo, Gandalf, Thorin, Thranduil, and Bard must try their best to defend their own turf and prevent the wrong people from reaching the mountain and its precious treasure. The battle rages on for a long time resulting in many walking wounded and dead. Things get personal between the armies when certain leaders go down during combat. Tears will be shed when some of our favourite characters fall by the way of the sword in honour of their people and their beliefs.

my thoughts: It is kind of sad that The Hobbit series and Lord of the Rings series are now officially done and over with. It’s been more than a decade since these loveable characters come to life from the pages of J.R.R. Tolkien’s masterpiece and onto the big screen. The Hobbit: Battle of the Five Armies was a great send off of the characters in the Hobbit series while setting up the eventual events of the Lord of the Rings movies.

I thought the acting and writing were great in this film but the special effects is what takes the cake here. Despite some very cheesy sequences, the computer generated fight scenes are simply amazing and deserve some award recognition at a future awards show. These are not the same effects one would have seen in Dawn of the Planet of the Apes, where real people were wearing suits, these effects are thousands upon thousands of fighters battling for tooth and nail at the base of a mountain. Aside from these sequences, the story takes up on the mountain sides where individual battles take place right on the edges of cliffs thus resulting in a significant loss of life. The camera angles keep the viewers on the edge of their seat as the sword cling and clang while tiny pieces of rock give away underneath them.

When the final showdown takes place on a frozen waterfall it was a classic David versus Goliath battle where it came down to who was going to out smart who. Size didn’t really make a difference in any of the battles since the dwarves and elves don’t see eye to eye with the ugly Orcs, but these creatures have a one track mind which is their ultimate weakness. When Azog and Thorin finally meet to settle their differences, it really brings an end to an epic subplot to the whole Hobbit trilogy but in a very anti-climatic way. After the blood washed over the falls I felt kinda let down that we went through all this trouble and two sword stabs later the battle was over. It was very quick which resulted in a very fast paced ending to the story.

There could have been a better ending to this movie and part of the Middle Earth story. It is a funny scene when Bilbo returns home to the Shire, but it is kinda frustrating that Peter Jackson and the writers wanted to focus more on that then the aftermath of the battle. Everyone goes their separate ways, everyone cries for their lost ones, and everyone says their goodbyes and it all feels rushed. There’s no time to reflect on what they just did together, there’s no real closure to anything.

Don’t get me wrong I’m not saying this movie was bad in any way shape or form, just wished things could have gone a little differently at the end. I loved this movie along with all the other movies of Middle Earth. My favourite part of The Battle of the Five Armies had to be when Orlando Bloom’s Legolas is battling an Orc on a tower bridge that begins to crumble under his feet. This scene is by far the lamest one of them all but the slow motion had me laughing.

my final thoughts: The Hobbit The Battle of the Five Armies was another epic adventure down in Middle Earth. The events of this two-hour and twenty-four minute journey flow nicely into the future events of the Lord of the Rings. Not all of our favourite characters will be along for the ride so be prepared to watch a few of them down in battle in a great special effects masterpiece that should be enjoyed on the big screen.