movie summary: World War II had many secrets. There were spies who played both sides and there were many weapons each side owned that they would turn the tide in their favour. Germany had a machine called Enigma that would encode all their messages into a bunch of random letters and only the person on the other end with the key would be able to read it. There were a few hundred people working within the British military that tried every day to crack the code, but if they didn’t succeed their work would be lost because at midnight the code letters would change for the next day. Frustrated with numerous failed attempts to crack the codes, the British military and secret service, MI6, decide to recruit the smartest people in the country to help do the impossible.

Alan Turing (Benedict Cumberbatch) is one of the most brilliant minds in all of Britain when he walks into the office of Commander Denniston (Charles Dance). His manner, attitude, and personality piss the Commander off so much that he is thrown out of his office. When cooler heads prevail, Alex is selected to work with a special group of candidates headed by MI6 agent Stewart Menzies (Mark Strong) and Hugh Alexander (Matthew Goode). After a few days Alex doesn’t mesh well with his new co-workers which causes a lot of friction amongst the guys. He spends his afternoon drawing up blue prints while the rest of the guys focus on the new codes of the day. Alan returns to see Commander Denniston with a request of $100,000 pounds to build his machine that will crack the codes in a matter of minutes. Denniston mocks Alan and refuses his money request, only to get a message from Prime Minister Winston Churchill that puts Alan in charge of the project and that he should be awarded all the resources he needs.

When Alan takes over he fires almost everyone in the group because they were not smart enough. Hugh convinces him that they need more men so Alex draws up a crossword puzzle in the local paper for candidates to submit their answers too. Joan Clarke (Kiera Knightley) solves the puzzle in minutes which lands her a job offer from Alan to join their group to crack the code. Armed a whole new group of guys, nothing really changes behind the scenes because Alan focuses all his time putting his machine together while everyone else continues to work on the codes. Tension begins to boil over for everyone because they think Alan isn’t a team player, that he is weird, and crazy. He tries his best to avoid the negative attention and keep his head down while connecting wires and pushing buttons on his machine that he has named “Charlie”.

The day finally arrives when Alan puts the finishing touches on his machine and turns it on for the group. For the next several hours and days the machine does nothing but spin and spin without coming up with any code breaking answers. Commander Denniston storms in and shuts the machine down calling Alan an idiot before demanding he be arrested for wasted the Crown’s money. Just when he’s about to walk out and shut down the whole Enigma program, Hugh, Joan, and the rest of the guys come to support and beg for one more month to get the kinks worked out of the machine. Alan is grateful that his friends came to his side and he puts a whole lot more of pressure on himself to get the job done.

After a few more weeks Alan can not get the machine to break the Enigma code, that is until one night out at the bar when he finally gets the clue he’s been looking for. 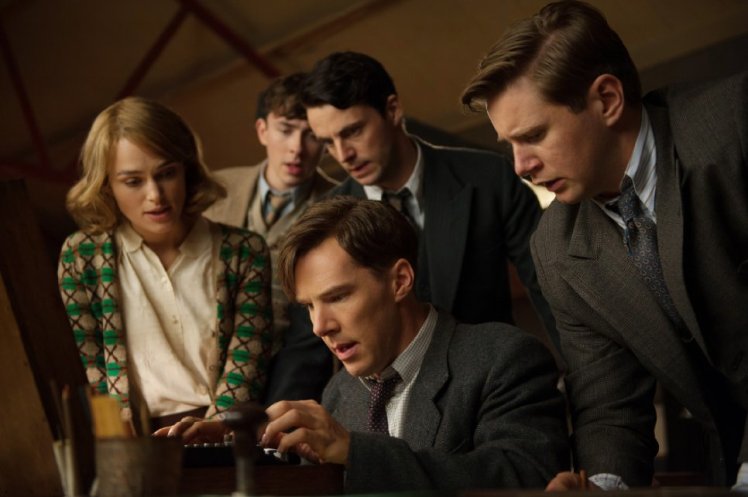 my thoughts: I’d be the first person to tell you that I had absolutely no interest in ever seeing the Imitation Game. I only know Benedict Cumberbatch from a handful of movie roles, like Khan in Star Trek: Into Darkness, and wouldn’t have gone to see this film just because he was in it. Then on Christmas Day I was there for the first showing and will say that the Imitation Game is one of the greatest movies I have ever seen in my life. That’s a bold statement I know, but while I watched this dramatic movie unfold I was thinking this was a solid 10 out 10. As the story progressed to the ending and Cumberbatch went through a character transformation I started to think that my rating was way too high and this ending was going to ruin the whole movie. Then before the credits roll the film takes the time to explain to us Alan Turing’s life during World War II, what his life was like after the war, and by the time he reached his 41st birthday how lonely and depressed he really was. It was a fitting end to an amazing film that showcased the life, times, and struggles of one of the world’s most brilliant men.

Alan Turing is a complex man, a smart man, but a man with a deep dark secret that wasn’t widely accepted in the 1940’s let alone in today’s society. It will be the downfall of his life and career, but it made him who he was and what made him special. The fact he was an outcast, someone everyone made fun because he was different, was an important part of his childhood and his adulthood which would lead him to create the first ever computer. He was never cut out to be a leader of a group a secret workers who busted their butt to crack the world’s most uncrackable code, but he took on that role and lead this group of people who hated his guts to amazing things. Despite the fact he had no friends at work or at home, he bonds with Joan who knows his secret but loves him anyways just the same because they connect on a level like no one else. Alan is strong enough and stubborn enough to overcome all the hatred everyone has for him because he just knows his creation will solve their problems and end the war. He sticks to his guns while pouring his heart and soul into the machine which is a form of therapy for a man who really no had no one else to understand him.

Benedict Cumberbatch had me so invested in the Alan Turing character that there was a few times I fought back tears. He portrays the mysterious man like no one ever could and really pulls out all the stops to play with our emotions. If I had a vote for the Best Actor in movie from 2014, he would have my vote in a heartbeat. No one I know has ever met Alan Turing but through Cumberbatch’s performance we are given the opportunity to see into a life that no one full understood or appreciated. He showcases the heartbreak and struggle of this complex character without really making us be like “awe, we need to feel bad for him.” We want to feel for Alan because he didn’t deserve any of the crap he got and just because he was different, was no reason for all the hatred. Cumberbatch makes us believe in his character, to be his friend, to listen to him, and to give him the chance he is asking for because he just knows.

In supporting roles I thought Matthew Goode was excellent as the cocky know it all World Chess Champion Hugh Alexander who would end up a major contributor to Alan’s success. After spending the majority of the movie hating his boss, he begins to understand Alan enough to realize that only by working together they can reach their goal. On the flip side, Kiera Knightley shines as the love interest, Joan Clarke, of our shy but intelligent star. She connects with him like no one else ever has and will be by his side throughout the best and worse times. She’ll be the crutch that he needs more than ever before as he tries to tackle one of the world’s biggest puzzles. Their relationship will have its ups and downs and continue on for years to come because of the special bond they share which can be defined as once in a lifetime.

my final thoughts: The Imitation Game may not be for everyone. Some of you may already know the characters and story, but I seriously recommend you take some time to watch Benedict Cumberbatch bring it all back to life. I hope this masterpiece gets the recognition it deserves because of its place in history and for the hard work the actors/actresses put forth. You’ll find yourself holding back your emotions as Cumberbatch gives one of the best performances of his career.