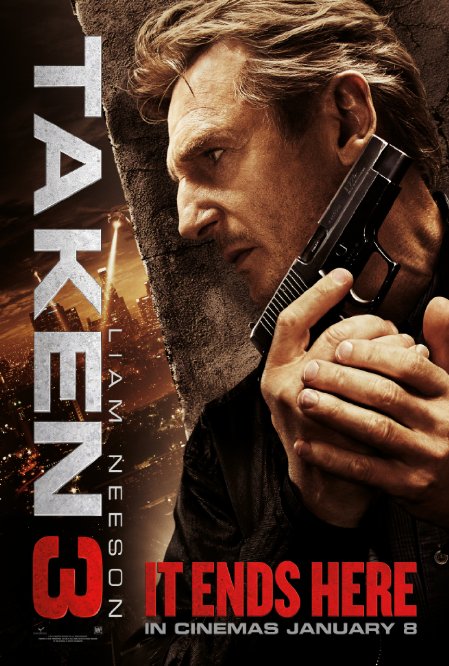 movie summary: When someone is a retired secret CIA operative/super assassin, it is really tough to live a normal life. Bryan Mills (Liam Neeson) tries to live a quiet life in Los Angeles near his daughter Kim (Maggie Grace), while his ex-wife Lenore (Famke Janssen) is going through some marriage drama with her husband Stewart (Dougray Scott). Things take a turn for a worse when Lenore ends up dead in Bryan’s bedroom, leaving to be the prime suspect. He will lead the LAPD on a wild chase across the streets to clear his name, protect his daughter, and find the person responsible for the death of his love.

my thoughts:  Most of you went into Taken 3 knowing exactly what you were getting yourself into. I was surprised that the 8pm showing on Friday night was almost sold out for a movie that has gotten horrible reviews across the board. I had little to no expectations for this movie, except I only hoped it was better than the second one. There was a part of me that wondered if they would kill off the Bryan Mills character or that his daughter Kim would somehow become just like him. I’m not ruining the movie at all by telling you neither of those happen because this is a story about a man who always catches the bad guy(s) and comes out on top.

The movie will disappoint a majority of the audience with its predictability, lack of original dialogue, and how the bad guy is so obvious it takes all the fun out of trying to figure it out. On the other hand I really enjoyed this movie because after about a 20 minute story build up, it is a non-stop joy ride of explosions, shoot outs, and car chases. Sure all that action gets a bit sidetracked when they throw several Kim moments into it, but it helps sell us on how Liam Neeson’s character will stop at nothing to protect his family.

Neeson will be 63 this summer and still moves on-screen like he is 28. You would have to imagine by now that after three full length movies and countless years on the road fighting bad guys, that this guy would have lost a step. Amazingly though Mills is always one or two steps ahead of LAPD’s best detective Franck Dotzler (Forest Whitaker). Which doesn’t say a lot for a guy who spends the majority of his work day behind a desk, but Dotzler is not like the rest of them. He’s been around the game long enough to know that Mills is not a ordinary guy and that bringing in will take more men than he currently has. It’s a fun game of cat and mouse to watch Whitaker and Neeson try to outsmart one another and figure out the other’s next move. Both gather information in the most unconventional ways, but do their best to evaluate the data to find the one thing that is right under their nose to break everything wide open. I felt that Whitaker’s character was portrayed to be a tad bit slow and dumb at some points, including eating the bagels at the crime scene, but at the end of the day it was all part of the plan of his investigation. As the events unfold you know that Mills is going to escape whatever police custody he finds himself in yet Dotzler and his goons are always too late. Overall the cops and bodyguards all looked weak in the film which is unusual given the reputation of the Los Angeles Police Department.

It may sound a little crazy when I say that Maggie Grace did a good job as Kim, the daughter who never seems to stay out of trouble. I pointed out in my Taken 2 review that I find it a little hard to believe she doesn’t have any post traumatic stress from the events of the first movie, but hey the whole storyline for Taken 3 is pretty unbelievable so what more can you expect? These movies may be all about Bryan Mills, but none of this would be possible without Kim. She’s the reason he keeps fighting, the reason he keeps killing, and the main reason he stays alive. For a girl who doesn’t have a whole lot of life experience, she does have the sassy attitude and smarts to avoid the cops and protect her father when it matters the most.

It was sad to see a main character (Lenore) die, even if she was always on the outside of the main story. She was never really a major player in the game but her death fueled the whole story behind this third movie. I thought it was really absurd that Lenore would be married to someone who has ties to the Russian mafia on top of being a ruthless killer in his past life. I get that she was married to Bryan for all those years but you would have to think SOMEONE would have done a background check on this new guy. I’m sure when Kim got with her boyfriend, Bryan knew everything about him, yet Lenore can marry a guy who is around Kim all the time and be a known international criminal. Lenore has always had a thing for rich guys and Stuart is exactly what she is looking for. Despite his nice guy personality, he plays a really great bad guy. He’s up to something and no one suspects that he could be involved until it is too late. 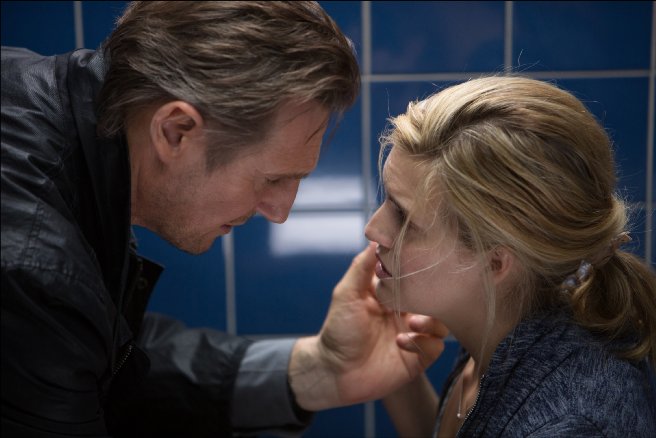 my final thoughts: Movies are usually made to entertain us. I was entertained for almost two hours while watching Taken 3. I got to watch a lot of things blow up, lots of cars flip and crash, while having a few laughs at some of the silly things the characters would say to one another. It was a fitting end to this trilogy that may or may not be back for a fourth round some day in the future. I really enjoyed this movie and if you didn’t, I’m sorry to say that I can’t protect you when Bryan Mills comes looking for for you. Good luck!