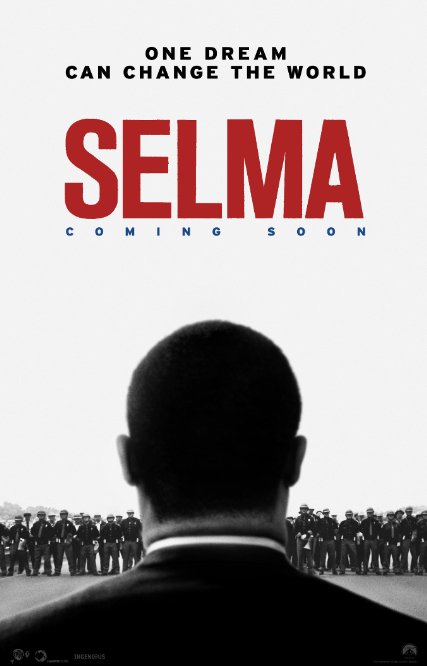 movie summary: Anyone who has studied history, let alone American history, is familiar with Dr. Martin Luther King, Jr. He was a pastor, non-violent activist, and the face of the American Civil Rights movement of the 1960’s. When President Lydon B. Johnson signed the Civil Right Act of 1964, black people were given equal rights everywhere in America. It is the right of every American citizen to vote but in the some southern states, black people had their applications to register to vote refused. Dr. King (David Oyelowo) heads to the small town of Selma Alabama to rally the people to stand up for themselves and lead a march to the capital in Montgomery to get their right to vote.

my thoughts: Hollywood has made countless movies and documentaries about the civil rights movement, if you throw on all the movies about slavery and the struggles of black people, we could fill the film department of the Library of Congress. Most of these movies focus on the life of Dr. King, Malcolm X, or Rosa Parks to name a few. Sometimes the storylines of those movies is a recap of the movement as a whole or focus on events that shaped the end of certain things. Selma is the rare feature film that focuses on one event, over a short period of weeks, that really gets into the good and bad details of a battle that eventually helps win the war.

I felt it was an inspiring and uplifting look into the lives of so many no-name people who just wanted to take part of the opportunity that was granted to them by the Civil Rights Act. A part of me was amazed that these innocent people were mistreated so badly for not doing anything wrong, but I have taken enough American History courses in college to know this is as real as it gets. The writers did their best to not showcase the worse parts of the beatings, even though these black people from Selma came face to face with a police force that had every intention of killing them no matter what.

Those cops were under direct order from Alabama Governor George Wallace (Tim Roth) who did an amazing job to capture the racist governor at his best. He had the mentally that even though it was constitutionally against the law to harm and kill black people, he didn’t consider them to be equal to white people so it was fine. Not fine, like no one ever got arrested, but fine in the fact that all juries and judges were white and simply let people walk away penalty free. These struggling black people were only trying to get their right to vote to elect other people to authority positions, which would then put Wallace in his place and get white people to stop the mistreatment once and for all. I haven’t seen Roth in a movie for a long time and enjoyed his performance because anyone who knows a thing or two about George Wallace knew that he was stubborn, selfish, and refuse to budge on anything related to black people and their “rights”.

I thought Tom Wilkinson’s casting as President Johnson was spot on. Wilkinson has had a long and amazing career while playing several American and British leaders. Despite playing a wide variety of characters, I always feel he can be at his best when he cast as a bad guy. In Selma, President Johnson comes across as the guy who gave black people their equal rights and now wants to wipe his hands free of the whole situation. Dr. King visits him many times to convince the President that this problem is not a local issue but a problem across the country. Things can only get worse if he doesn’t step up and act but the President just shrugs it off and thinks by pushing it under the carpet it will go away. When the beatings in Selma make the world news, only then does Johnson finally realize he has to do something before it ends in up happening in Washington and he’s booted out of power. My favourite scene in the whole movie was the meeting between Governor Wallace and President Johnson in the Oval Office. The poor sport attitude both characters showcased towards each other was hilarious. When neither of them offered to change their opinion on the subject, Johnson finally just told him how it was going to be. It was a complete reversal of his stance but the time had finally come for him to take a stance.

Of course I saved the best character for last and that Dr. King played by David Oyelowo. I read just last week that Oyelowo had a dream once that he would get the opportunity Dr. King in a movie and that dream became a reality with Selma. This story doesn’t focus on his whole life story like other films have done, but instead zeroed in on a two month period of his work. It really hammers home the point of his schedule and how it has created a lot of tension in his marriage, and how his public appearances have the FBI crawling all over his life to protect him and bring him down at the same time. I have never been one to really look deep in Martin Luther King Jr.’s life but after watching Selma it sparked my interest to go online and search more about him. Oyelowo does a fantastic job in portraying the emotion, heartbreak, and strength of a man in charge of a movement that will change the world. It was some really big shoes to fill but when anyone tries to tackle an iconic public figure it is always dealt with in a cautious manner. He just had the look and personality to draw us into Dr. King’s character and help understand what this march was all about.

my final thoughts: Selma was a great in-depth look into one of the small victories of the Civil Rights Movement. Dr. Martin Luther King Jr. is portrayed as an educated fearless leader that will do everything he can to help his fellow-man without the use of violence. The content in the movie is graphic at times but it really drives home the point of bad things were in the 1960’s. Some of you will shed a tear as the story unfolds while others may feel the urge to go look back at one of the most troubling times in American history and want to learn more.