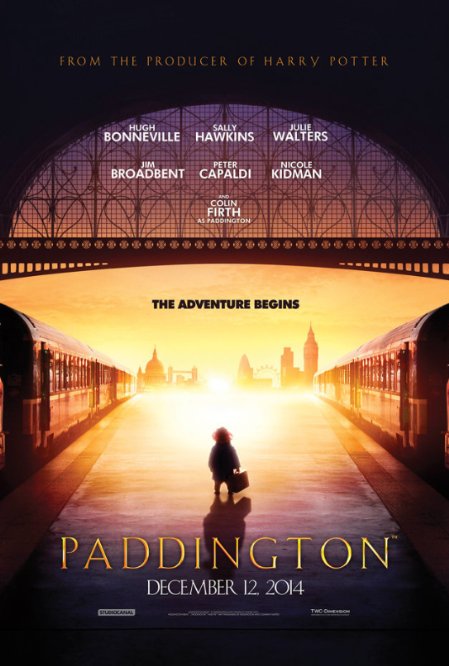 movie summary: Deep in the forests of Dark Peru, there lives a family of talking bears. When a geographer, Montgomery Clyde (Tim Downie), discovers them on an expedition, he offers them a place to live if they ever make the trek to London. After a series of events, a young bear makes the journey north in hopes of finding Mr. Clyde in order to find a new home. While waiting at the train station the young bear will bump into the Brown family, who open their house and hearts to the cub they name Paddington (Ben Whishaw).

my thoughts: I will be completely honest with all of you and say I was very skeptical about Paddington. In the trailer I thought the animated bear would be a little cheesy and the story wouldn’t be great. Wow was I mistaken. Paddington is by far the best movie I’ve seen so far in 2015 because the story was so charming, funny, and heart warming. I literally spent the majority of the 95 minutes holding back the tears as Paddington tries to find a family. No one really believes his story and he is deemed a clumsy outcast who just wants to find a home. His character is not meant to be considered a loner or loser, just no one has ever met a talking bear before and it’s quite hard to comprehend what to make of his situation.

The Brown family, led by their super cautious father Henry (Hugh Bonneville), is not very welcoming of this talking bear until Mary Brown (Sally Hawkins) steps up and takes him in. Jonathan (Samuel Joslin) is always doing something crazy that scares his dad to death and takes an instant liking to his new clumsy room-mate. Judy (Madeleine Harris) on the other hand doesn’t care about Paddington because it will only ruin her reputation if anyone knew she talked to a bear. Together this family lives by a strict set of rules and is in a desperate need of a change. In what turned out to be an act of fate, Paddington stepped into their lives and changed it for the better.

Paddington is a really caring person who loves his marmalade sandwiches and his uncle’s red hat. He means no harm to anyone or anything on top of being a really smart bear. Sadly his clumsiness will be his biggest flaw yet his most charming trait. When the Browns take him in he will try his best to blend in, but never being in the big city before, he’ll crash and burn his way to trouble. Every time something bad goes wrong he gets the blame and it just isn’t right because he doesn’t know any better. Henry finally grows tired of his ways and decides it’s time for the family to let him go. It’s really heartbreaking to watch Paddington struggle to find a permanent home. If I had the opportunity and Paddington was a real bear, I’d serious take him in no question asked. I think he is an awesome bear with a humble personality that is thankful every day for a wonderful life he has been given. While we laugh at his misadventures, emotional people will shed a tear when he gets sucked into a death trap by the evil and conniving Millicent (Nicole Kidman), who just wants to kill him and then stuff him. It was at that moment of the movie that I wanted to reach out to him and pull him back to safety. Through out the whole movie it didn’t matter what situation Paddington or the Browns found themselves in, they did find unique and creative ways to get out of them which added another layer to story and their character’s charm.

What some people may find corny about this movie is how predictable the story will turn out to be, but that is just part of this amazing adventure. I wasn’t quite sure what to make of the story at the beginning but Paddington grew on me and I wanted him to find a home more than I wanted to finish the bag of M&Ms I was eating. I can’t say I remember any of the stories from the book series this movie was based upon, but I find myself drawn to look them up online or at the bookstore. I want to know more about my new clumsy friend and the other adventures he goes on. The writers did a fantastic job of tying in the jungles of Dark Peru with modern-day London, complete with the train station, the National Archives, and other famous beautiful sights around the city. The whole movie was put together in such a fashion that all audiences can sit back and enjoy the movie for what it is, a fun adventure.

my final thoughts: Paddington is a beautiful film that really brings the story of a clumsy bear to life. This movie has a very heartfelt message that is jammed packed with laughs and hilarious situations. It will be a hit for both the kids and parents and well worth the price of full admission. I know I will go see this movie again at theatres and will buy it the day it comes out on Blu-Ray.