movie summary: The majority of the world knows how tough life can be in the poorest countries of Africa. These are the kind of places where conflicts erupt in every village, innocent people always die, and guns is the only way to survive. Terrier (Sean Penn) is a sniper who helps protect the mines and their workers from the rebels. He works in a team with Felix (Javier Bardem) and Cox (Mark Rylance), while being madly in love with Annie (Jasmine Trinca). When the Minister of Mines decides to terminate all contracts in Congo, Terrier is sent on a secret mission to take him out. When the mission is finished Terrier is forced to leave Africa and Annie for his own protection. After seven to eight years away, he returns to the area only to have his life threaten by a bunch of rebels who were hired to kill him. Ticked off with how these recent events in his life have unfolded, Terrier will head to Europe to find Felix and Cox to figure out who has a bounty of his head. Little does he know that he would cross paths with Annie again and that he can no longer trust anyone he used to know.

my thoughts: The Gunman got little to no hype from what I saw or heard about, but did catch my interest after watching the trailer. I didn’t like the fact it was being promoted as the new movie from the director of Taken, because it actually wasn’t anything like Taken. Also let’s be honest here, Sean Penn is no Liam Neeson in terms of acting abilities or looks. The only other thing that kinda bugged me about the movie and the story is how Idris Elba is the second name down on the poster, yet seriously he has maybe five minutes of screen time and ten lines. Clearly this movie is all about Penn and his character, but it didn’t need to tease us with a solid cast with Elba and Javier Bardem, only to use them sparingly.

In terms of the story, acting, and the overall picture, The Gunman was far more impressive than expected. The pace of the movie reminded me of The American with George Clooney from 2010, a film I hated the first time through only to have it grow on me the next time I watched it. As The Gunman built up a solid story I was able to get behind it, understand it, and appreciate it more. Of course this film is your typical “assassin does a job and then deals with the consequences a decade later” but the writers throw in a love triangle with the cocky Felix and beautiful Annie to spice things up. This part plays a major role in the story and ending thanks to several lies and double crosses.

Sean Penn looked really old in the film and I wonder why they couldn’t have cast someone else to star in this picture. He may be in amazing shape, since he spends the majority of the movie without a shirt on, but let’s just say he will never be voted as the sexiest guy alive. Years on and off-screen have taken its toll on his body, much like the experiences of his character who spent almost a decade in hiding. Penn proves he can still tell a good story with his clever ways to avoid capture and quick finger on the trigger. Despite his best efforts to act tough, his Terrier character has a serious medical condition that continues to rear its head at the wrong times and threatens to end his life if he doesn’t stop living in chaos.

The final thing I have to say is Javier Bardem is seriously a great bad guy. I know he’s made a career in other films but his performance in Skyfall will always be at the top of my list. He just comes across as someone who can be nice yet is really evil-minded. His ascent is great because just when he seems like he cares, his tone can switch and he’s ready to kill you on the spot. I wish he had a bigger role in the overall story, but even his presence for half of the movie was worth it. 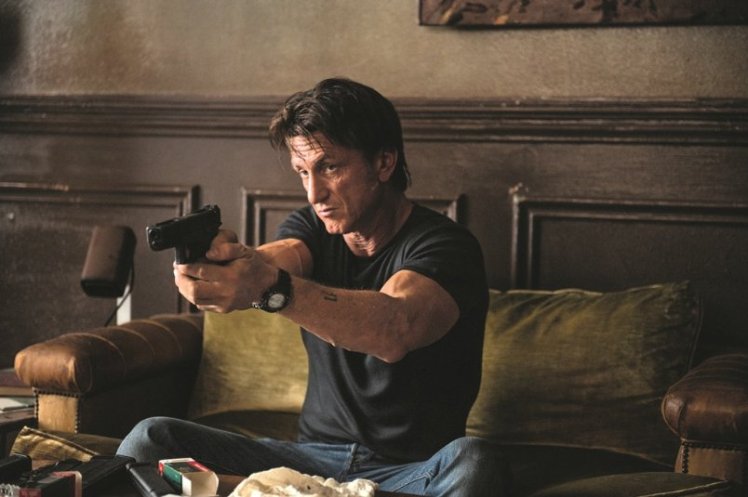 my final thoughts: The Gunman is the perfect made for Netflix movie because it has a solid cast and plot, but was not really worthy of a full-scale release. If you like a slow pace movie about revenge, greed, and love then this movie might be for you. Filmed in a variety of places across Europe and Africa, The Gunman doesn’t hold back on bullets or fight sequences which makes up for several long slow parts.