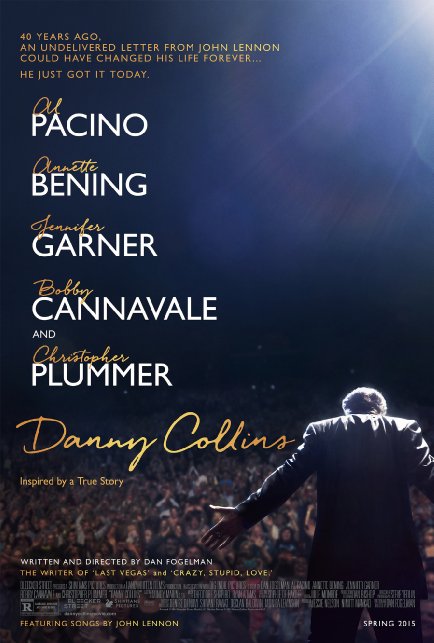 movie summary: Danny Collins (Al Pacino) is a rock legend. He’s been singing for over forty years, to sold out venues across the world. Danny has everything life could ever offer the rich and famous, that is until he gets a birthday gift that will change his life. His manager Frank (Christopher Plummer) was able to secure a personal letter written by John Lennon to Danny way back in 1971. Included in the letter is a message about dealing with the celebrity lifestyle and that they should get together sometime to discuss writing music together. Danny can’t believe that he never got this letter and begins to question how his life would have turned out had he made that phone call. After catching his young fiance Sophie (Katarina Cas) cheating on him, Danny decides to pack his bags and take a vacation in New Jersey, where he hopes to meet his son Tom Donnelly (Bobby Cannavale) for the first time.

my thoughts: When Danny Collins came out two weeks ago I only got interested in catching the movie because I wanted to see Al Pacino sing. Sadly there wasn’t a lot of singing (or should I say thankfully) but Pacino as Collins was a character I liked from the beginning and admired at the end. I was very thrilled to have caught this movie at the theatre because it was really good. The story may be geared towards an older audience and judging by the other people in the theatre with me on Tuesday, I may have been the youngest by a decade. It really didn’t matter who the movie was geared towards because this heart-felt comedy had me laughing through out.

This is a story that gets played out all the time. You all know the one where the missing parent comes back into their kids life, hoping to get a chance to fix past wrongs. There are so many other elements to this story that actually made it different and enjoyable. I won’t go into much detail about those things because it will ruin a major plot twist that you won’t see coming. All you need to know is that Danny Collins will be given a second lease on life with his son, despite a few hiccups along the way, and charm his way into your hearts.

As the beginning of the story was unfolding, I began to ponder whether or not this was just a day in the life of Al Pacino the man, and not a fictional character named Danny Collins. Years of being a celebrity have taken their toll on Pacino. He looked mildly old in the 1990s and early 2000s but looks even older nowadays. It takes a whole crew to fix him before a performance, thanks to the hard miles on his body. Unphased by his current looks, Danny undergoes a transformation that will have a ripple effect on every close to him. He is a brilliant mind, not just with a music sheet, but in real life. Eager to learn new things and not bashful to pull strings through connections or his name, Danny will do everything in his power to change his future. The Lennon letter was probably not meant to find him way back in 1971, because fate had a different idea when it popped into his lap in 2014. Everything happens for a reason and Danny has built himself such an amazing life that when he’s ready to change it for all the right reasons, the opportunities are there.

Jennifer Garner may be a bigger name then Bobby Cannavale, but Cannavale steals the second half of the movie here. I thought he was fantastic in his role as the disgruntled son who wants his dad out of his life. His character Tom Donnelly has been through the ringer with his single mom and is furious that his dad suddenly shows up because he had a change of heart. Tom has built up a lot of anger and it will take so much effort from Danny to get his son to see a new side of him. Of course any new relationship will have its bumps, but both of these characters are adults and are able to put their differences aside to try to be a family. The chemistry between Pacino and Cannavale is a really good aspect of the movie, which makes us believe these two strangers could actually be related. They both have a sarcastic wit to their characters that flows flawlessly together. 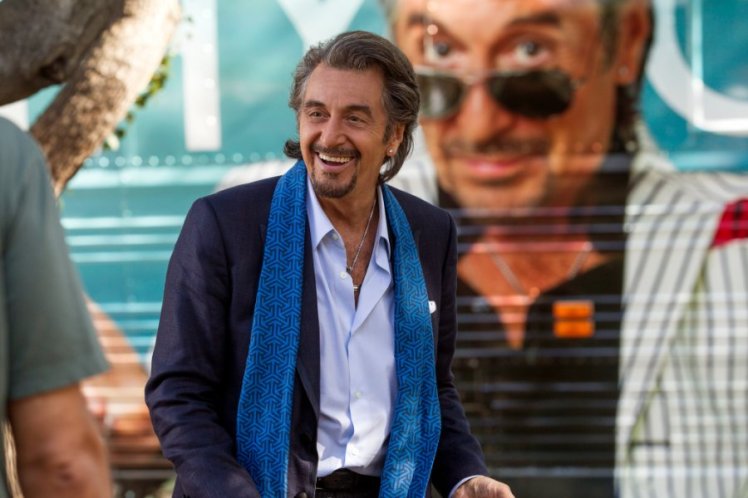 my final thoughts: I got more than I bargained for when I bought my ticket to see Danny Collins. Al Pacino still has the ability to pull off a likeable character despite being a complete train wreck and prick. He’s surrounded by a solid cast like Annette Bening, Plummer, Garner, and Cannavale that know his biggest flaws but also know deep down inside he’s got a heart of gold. I’d recommend checking this film out sometime where ever it ends up playing.