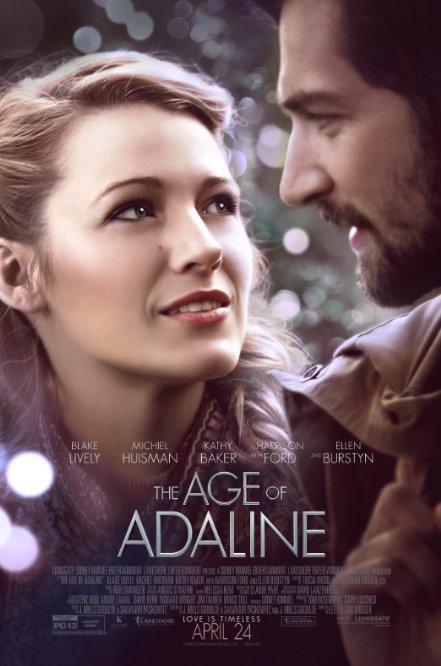 movie summary: Every year the world turns a page to a New Year and celebrates the first baby born after the stroke of midnight. In 1908 Adaline Bowman (Blake Lively) was born in San Francisco. After growing up, marrying, and having a baby girl, Adaline will get into an accident that will take her life. A bolt of lightning will change Adaline’s future for the next 78 years. The strike brought her back, but she’ll be forced to live her life on the run until the year 2014 when she’ll meet Ellis Jones (Michiel Huisman). This nice guy will try his hardest to win Adaline’s heart while she will go to extremes to protect her secrets. Things only get more complicated when she agrees to join Ellis at his parent’s 40th Anniversary, where his dad William (Harrison Ford), knew Adaline’s mother. Running away is the only thing she knows and despite being deeply in love with Ellis, she’ll run decide to run last time.

my thoughts: I didn’t know what to expect when I went into Age of Adaline, except this was going to be a romantic tale of a girl who couldn’t age. There were many parts of the story I loved and one part I thought was a little crazy. Overall this movie had strong performances from its cast including the lovely Blake Lively who steals the show with elegance and grace. It was hard to sit there and not compare this movie to the Time Traveler’s Wife, because both feature a lead character who defies time and because of that has a cascading effect on the human souls they choose to interact with. This tale though was far more romantic and realistic than most time related movies which made it an enjoyable film to sit through.

There are a lot of movies out there where a narrator reads parts of the story to us. The Age of Adaline is the rare movie where the narrator actually does a great job explaining the events as they unfold and then help build up the emotions of the characters. It really was a great addition to the story. It must be extremely tough to be the same age for decades but Blake Lively pulls it off pretty flawlessly. There were a few moments that I chuckled and a few that I had to hold back the tears. I liked the chemistry Lively had with Huisman because they really challenged one another to get out of their comfort zones.

When two people meet and fall in love, it always starts out with fireworks. Just like the real world, not every relationship is perfect and sometimes problems arise that threaten to destroy everything. Adaline has avoided love her whole life, to protect the guys she could fall for. Ellis comes along and completely changes everything which finally forces Adaline to question her own mortality. There are many movie couples I love and root for them to succeed, before the end credits hit Adaline and Ellis became one of them.

my final thoughts: Age of Adaline is probably the best romantic movie of the year so far. It had likable characters with a realistic plot that will make everyone in the audience get a little emotional. I’d recommend checking it out sometime and don’t be afraid to pay full price because it will be worth it. Guys take your girlfriend to this movie, they will love you for it.