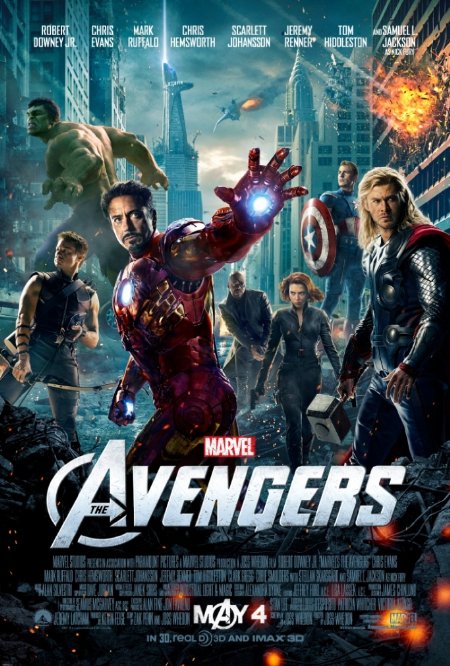 movie summary: The world is always the number one target for anyone that wants to take control of the universe. SHIELD monitors the world and all the bad guys in it, but no one saw Thor’s evil brother Loki (Tom Hiddleston) when he showed up a top-secret lab to steal the glowing Tesseract. After Loki gains control of the most powerful cube in the universe, he will brain wash lead scientist Selvig (Stellan Skarsgard) into programming it to open a portal in earth’s atmosphere. His master plan is to deploy an army of creatures to kill all the human and blow up the planet when he’s done. Unfortunately for Loki, SHIELD leader Nick Fury (Samuel L. Jackson) has launched a program to round-up all the super heroes in the world to bring him down. He’ll call in Bruce Banner (Hulk), Natasha Romanoff (Black Widow), and Steve Rogers (Captain America). Thor shows up uninvited while Tony Stark (Iron Man) will crash the party and ruffle everyone’s feathers. The gang act swiftly to capture Loki, but getting caught was always part of his plan. He threatens to bring down SHIELD’s invisible aircraft before Selvig launches the Tesseract in New York City forcing the Avengers to act quickly once again to save the world.

my thoughts: It is hard to believe it’s been three years already since the third highest grossing movie in history rocked the world, changing the superhero genre forever. Like I mentioned in my review for Avengers: Age of Ultron yesterday, I haven’t seen this film in over a year and did not want to watch it before Friday for fear I’d be more concerned with comparing the two. After watching some epic hockey games last night I decided to watch Avengers before bed so I could finally review it for my site.

I actually feel bad for comparing the movies but there’s really no other way to explain why I didn’t like this one as much after watching it again. In 2012 this movie was simply amazing, jam-packed with action, a few laughs, and enough male egos that you can’t help but be entertained. Loki is by far the best evil antagonist any of the Avengers have ever faced. His abilities appear to be endless and in defeat will come back stronger to tear up Asgard in the second Thor movie: The Dark World. He is smart, cunning, calculating, and always a step ahead. He’ll try his best to divide up the Avengers to make them weak, but his brother Thor thinks on the same level and will fight his own teammates to prove his point.

In terms of fights, this movie really only has three fight scenes in it and unlike Age of Ultron they are not as epic. At least they escalated from Thor’s arrival, to the aircraft firefight, to the showdown in New York City. There’s a lot of CGI in this film and probably two solid hours of green screen work. Don’t get me wrong, watching the Avengers come together for the first time is pretty amazing. These characters have all been successful in their own careers but when they are put together they really are unstoppable. Watching them work their magic against unknown evil forces was worth every penny of admission on the big screen.

Of course Avengers set the bar for every Marvel and DC movie moving further because Joss Whedon went and above and beyond with character development. With the exception of Black Widow and Hawkeye all the remaining members of the Avengers have had a major movie release that laid the ground work for Whedon to focus on their skill sets and abilities to contribute to the mission. Everyone’s favourite heroes show up to defend earth and bring their unique gifts to the team which really acts like a glue that keeps things together. Sure these guys/girls bicker back and forth, but at the end of the day they all know what’s at stake and will put their differences aside to save the world. What I realized though in this film compared to Age of Ultron is they are not as funny together. It’s sad but true, after you watch the second one and come back to the first one you’ll be like where is the humour? There was about four scenes where I was laughing out loud, with the best laugh coming at Loki’s expense. The sequel is seriously filled with non-stop laughs with even more explosions and fights, which was a major step up from this one.

There are some people out there who dislike how there are so many things going with the storylines and characters in Age of Ultron. The bright side of the first Avengers movie is how simple the plot is, despite having some very complex variables thrown in to keep everyone on the edge of their seat. Everything came together very smoothly for both the SHIELD and the Avengers. We got a glimpse of how powerful this secret agency really is while getting a chance to see how our super heroes have evolved from their previous attempts to take down bad guys. Speaking of bad guys, I have one silly question that could be asked after watching this movie, where are all the other bad guys during this time? Like how come Loki is the only one taking down the Avengers? Where are Iron Man’s bad guys? What about other evil creatures from Thor’s world? I know they will never make a “bad guys actually win for once” kind of movie, but when Loki is fighting a whole team of super heroes, why is he alone? I get that each individual Marvel movie focuses on a particular character and their storylines. The writers for the Avengers don’t have enough space to jam pack 18 bad guys and 6 good guys into one script, let alone a budget. Of course every battle is a numbers game and even though our six heroes are out numbered at every turn, they are smart and powerful enough to over come the odds to give us another chance to live in peace and harmony…until the next time someone wants to destroy earth.

my final thoughts: The Avengers came together to save the world because no one else would be able to pull it off with such style and grace. This film may be three years old but will stand the test of time as one, if not the best, comic book story come to life on the big screen. Brilliant writing and amazing acting bring the story from secret places to the streets of New York City, as a group of super humans race to save their home planet. Their epic adventure that make other adventures seem less entertaining and impactful. This film is a must see and own.