movie summary: Bound by a shared destiny, a teen bursting with scientific curiosity and a former boy-genius inventor embark on a mission to unearth the secrets of a place somewhere in time and space that exists in their collective memory.(www.imdb.com)

my thoughts: Tomorrowland has been promoted for months and I got to say Disney did a fantastic job building up an audience for this futuristic blockbuster. Each teaser trailer made me more and more interested in the movie, not because of George Clooney or Britt Robertson, but because I wanted to know if she ever makes it to Tomorrowland. This place seems to be the future of the human race, filled with beautiful sky scrapers, people flying around on jet packs, and mobile transportation that floats through the air with ease.

One pin will change the world of a ordinary girl, Casey (Robertson), who has a heart of gold and is probably one of the smartest teenagers in the world. When presented with the opportunity to actually see Tomorrowland, she’ll travel across the country to meet Frank Walker (Clooney). Frank may be a little bitter these days, but has no interest in helping Casey or going back to Tomorrowland. Bound and determined for answers, she’ll question him up and down with some of the toughest questions in this universe and quite possibility any universe. The pair, despite their differences, actually mesh very well together which helps the story along as they try to escape and figure out what has gone wrong in Tomorrowland.

There is a lot of humour and sarcasm which brings out the best in Robertson and Clooney. She will steal the show from him with her over zealous reactions, expressions, and sere determination. Her never give up personality may actually be the key to the survival of the human race and the whole reason she got the pin. Robinson is making huge strides in her career as she just recently appeared in Nicholas Spark’s newest movie; The Longest Ride. I thought she was okay in that film as the lead love interest, but I felt she really shined in this one as a teenage girl who wants answers about the cosmos.

The special effects in this movie are really good and I got to wonder what might have been if Disney had made this movie like 10 years ago. We have come so far with CGI that anything is almost possible these days. Although Tomorrowland the place is presented in the typical futuristic city fashion, I would totally be interested in seeing such a place in real life. I watched this film in IMAX and would say that it was well worth the use of my SCENE points because the visual effects are spectacular on such a huge screen. The final thing I got to say is the pinnacle of Tomorrowland happens to be a huge castle like structure in the middle of the city, that sorta looks like the iconic Magic Kingdom if you ask me. Anyone think that too or am I just seeing things? 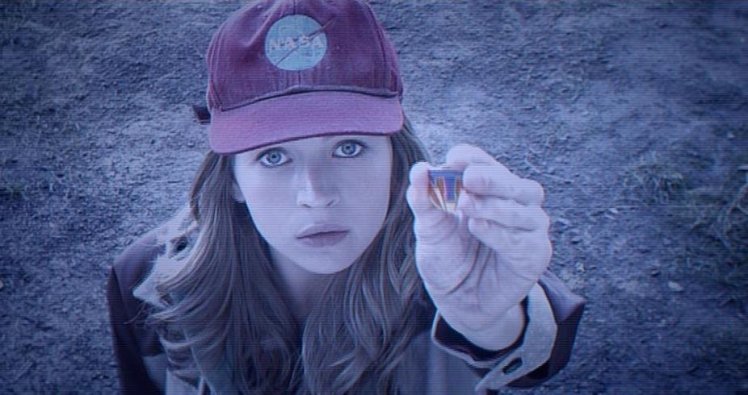 my final thoughts: Just last week a friend on Facebook described me as someone who recommends terrible movies. In keeping with that tradition I am going to recommend you go watch Tomorrowland. This present day/futuristic adventure movie may be cliché at every turn but I didn’t care at all because I was entertained for over two hours. I loved this movie and would totally check it out again.