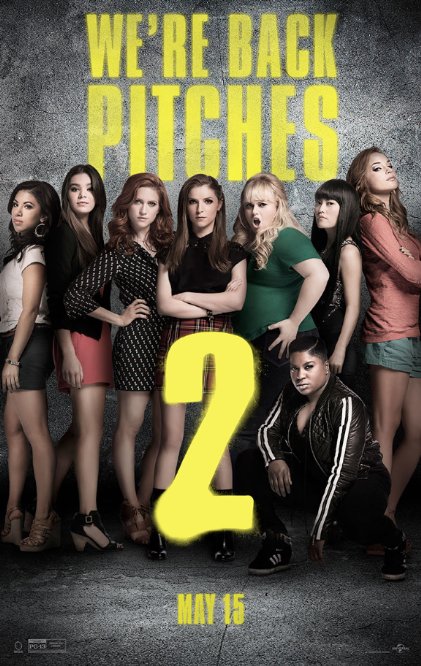 movie summary: After a humiliating command performance at Lincoln Center, the Barden Bellas enter an international competition that no American group has ever won in order to regain their status and right to perform. (www.imdb.com)

my thoughts: The Pitches are back! But wow did someone forget to bring a decent movie script with them. I mean no offense to Elizabeth Banks, Anna Kendrick, Brittany Snow, Hailee Steinfeld, or Rebel Wilson but Pitch Perfect 2 was a far cry from what was once a ground breaking original idea. Don’t get me wrong, this movie was funny, even funnier than the first one. It just lacked a good story, a story we could get behind or even care about. The Braden Bellas are the three in a row National Champions, yet after a disaster performance in front of the President of the United States, they all of sudden lose their voice. Like come on, seriously? Years upon years of practicing and all of sudden they lost everything. What a lame problem the writers created to get the Bellas over a hump into the World Championship Finals. Also this is the Bellas and they sing in Hollywood, which means you already know how this movie is going to end. You can’t fast forward to the end, but the girls hit every bump on the cliché underdog road to give us a performance that is half as good as the original one.

The Tremblemakers were fantastic antagonists in the first film, but the Das Auto Machine (DAS) German group just don’t come across as a creditable threat. These guys just don’t look like a capella singers, while their dancing was all over the place. Although it was really choreographed, the actors just don’t like professional dancers. The Bellas are all back except former leader Aubrey, played by Anna Camp. Beca (Kendrick) has been the leader and Chloe (Snow) has done everything she can to continue living the dream by failing courses year after year. To add more subplots to a simple “overcoming adversity” storyline, none of the Bellas are ready to graduate and become adults. Well there’s one exception in the group, but heaven forbid she have a life outside of the group. The group meanwhile picked up a girl named Flo (Chrissie Fit) who is just there to add silly one-liners that are not actually funny. The Bellas can’t recruit, but bring on a legacy girl named Emily (Steinfeld) who can actually sing and dance, but is only a freshman and isn’t ready to jump into the deep end of the pool. Of course all of your other favourites return but no one is as funny as John Michael Higgins and Banks on commentary.

The best parts of this movie is when Higgins and Banks are describing the competition, filled with racial and ethnic jokes, that will have you on the floor laughing. I can’t wait to own this when it comes out because I want to listen to their commentary again and be able to rewind it whenever I want.

I don’t mean to sound bitter and I don’t want to say my expectations were so high that I was disappointed. I was let down because the story had so many extra parts in it that really masked the lack of dancing, singing, and a capella that came out of the first film. Personally the music selections in the film were questionable and I got to admit I’m in no rush to download this soundtrack. I’m just gonna continue playing the first one and remember the good ol’ days. The rip-off scene went much longer in this film with a bunch of cameo appearances, yet really lack the chemistry between the groups from the first film. The finale which is the World Championships, is seriously so rushed that if you blink twice you may miss all of it. The Bellas steal the set with an original piece of music, but it didn’t have the spark I was looking and hoping for.

my final thoughts: I know there is a huge group of people out there who will fall in love with this movie, it’s crazy characters, and old school songs. I expected a better build and story out of the Bellas in their second act, but comedy ruled the day in this film that focused more on girls growing up then winning a singing competition. I will still buy this movie someday and I will watch it again, just won’t venture out to the theatre to see this one five times like I did the original. Maybe I’m being too critical, maybe I’m not.