Rob and I would like to once again welcome you to another review for our Argumentative August Blogathon. This next film, Rules of Engagement is being reviewed by myself here at tenstarsorless.com. Let’s see what I thought of this movie…. 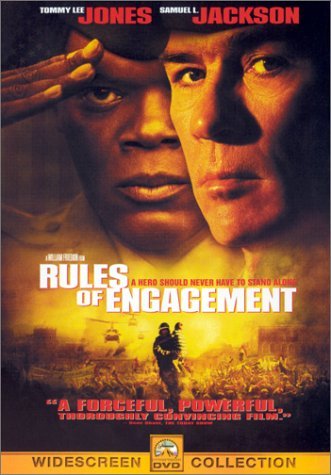 I was a big fan of this movie when it came in 2000 and have owned it on DVD since its release. Rules of Engagement is a fantastic story about honour, respect, and duty. A great aspect of the story is how Samuel L Jackson’s character does his assigned job, but when the job turns into a mess, he is thrown to the wolves for punishment.

There is not a whole lot I didn’t like about the movie, although with that being said they could have focused a little more time on the trial.

Was Rules of Engagement a good story?

Some people could sit back and compare Rules of Engagement to A Few Good Men as one of the best military trial movies, even though they are completely different themes. This film is a solid story about the rules of combat and the honour/respect Marines have for one another on and off the field.

There are five notable performances. The good guys include Jackson as Colonel Saunders and Tommy Lee Jones as his lawyer who is a washed up Marine who is asked to save his best friend. On the flip side, Guy Pierce is a great cut throat Marine lawyer who is willing to push for the harshest punishment possible, because he firmly believes in the merits of the case. Bruce Greenwood is as dirty as it comes and his performance in this film as made me hate him (and characters he plays) for a long time. In a small role Ben Kingsley plays the ambassador who changes his story on a consistent basis to please his superiors and avoid the truth at all costs.

Would I recommend it?

Yes, Rules of Engagement will please military personnel and movie goers at the same time. It provides a great story about honour and friendship that doesn’t go deep into all the legal details, but just enough to keep you interested in the outcome of the trial.