Rob and I would like to once again welcome you to another review for our Argumentative August Blogathon. This next film, My Cousin Vinny is being reviewed by myself here at tenstarsorless.com. Let’s see what I thought of this movie…. 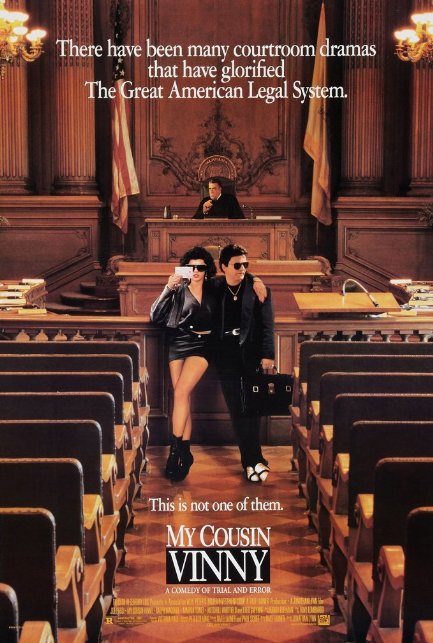 My Cousin Vinny is a movie I have been dying to write a review ever since I started my blog. This movie has to be one of my all-time favourites because of how outrageously funny it is. Whether it’s Joe Pesci stumbling over his cross examinations, fighting with his girlfriend Marisa Tomei, getting thrown in jail for being held in contempt of court, or just learning the laws of Alabama on the fly, this movie has no stop laughs from start to finish. Seriously, I challenge anyone to find something wrong with this movie. Even the mean-spirited judge, played by Fred Gwynn, is hilarious.

Anyone who reads my review is welcome to leave me a comment…there’s really nothing wrong with this movie. Sure a lot of it is unrealistic and absolutely over the top, but the greatest part of My Cousin Vinny is it is pure entertainment and nothing more.

Was My Cousin Vinny a good story?

This movie may be one of the greatest comedies ever set in the courtroom. Two innocent teens get mistaken for a crime and then have to call upon the family lawyer to bail them out, only problem is he is far from the typical lawyer you would expect to show up in the courtroom. I can’t imagine how the writers and director managed to keep a straight face when writing the jokes and funny sequences in this film.

Marisa Tomei won an Oscar for her performance in the movie. Yes, take a moment to let that sink in. In what is considered one of the biggest upsets in Oscar history, she walked away the golden statue because she is the perfect sidekick to Joe Pesci’s know it all character. While he’s going down in flames in the court room, she’s busting his chops at home about their upcoming marriage and their future together. No matter what way Pesci turns he is bombarded with issues and he seriously has no clue what to do. Always known as a tough as nails mobster, it was really refreshing to see try to be a tough guy but with a little comedic flare.

Would I recommend it?

I personally feel if you have never seen My Cousin Vinny in your lifetime, you are missing out on a fantastic movie with an original storyline and hilarious characters. Yes this film won’t be for everyone, but there are enough jokes to make even the toughest sync chuckle. My Cousin Vinny is one of Hollywood’s best kept secrets. In a time when the average movie goer was being swayed for action heroes, everyone may have missed this comedy gem that still stands the test of time 23 years later.