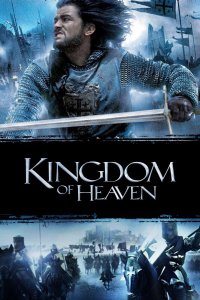 8/10
The Kingdom of Heaven is based on real events that have helped shape the modern world as we know it.

The beginning is slow and confusing to the point that I had more questions than I probably should have. As the movie galloped along in the sands of the middle east, everything started to make sense and then the battle happened. I was beginning to think that this was a rather long and tedious movie until it turned into one epic blood bath.

Director Ridley Scott did not hold back on the gore, so when a sword goes through someone, it is either gonna split them in half or cause all of their inside parts to fall out. It’s incredible to think that this movie was just a writer’s interpretation of one of the greatest battles of the crusades, but could you imagine what it must have been like to witness it in person.

Massive fires and thousands of arrows decide the fate of a city that is still fought and bled over to this very day. The Kingdom of Heaven is just one of the best examples, ever be written or directed, that showcase how fierce battles were in those days. Wars are not the same anymore, and as a civilization, we have come a long with technology and fighting tactics, but we still fight blood baths over religious beliefs.

Orlando Bloom will be remembered for many iconic roles, but I feel Balian de Ibelin should be one of his top three. His passion, swordsmanship, and dedication for doing the right thing at the right time made him a heroic character in troubling times. He was someone people could believe in, the person who could be an outstanding leader when called upon and to stand for the ones who can’t stand for themselves. Bloom’s character is the only one who keeps a level head when trouble comes over the horizon.

It may have taken me a long time to finally watch this movie, which also took a while for me to get heavily invested in. When the drama finally unfolds, the Kingdom of Heaven turned into a film I’d be happy to watch again because it sparked my interest in the mythical characters and their heroic actions.