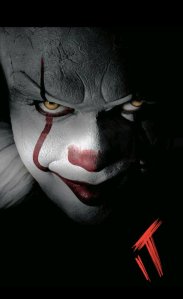 First things first, I have never seen the original movie. I have so many questions  about the story and the characters, that it appears many of the answers are in the first movie.

It as a movie was not scary at all. The main antagonist Pennywise, was disturbing and creepy as hell, which would be the only part that could make you jump, if you were scared of clowns. I honestly couldn’t tell if this movie wanted to be a suspenseful horror flick or a gory one? The clown only showed up in the gory scenes and the kids go on a suspenseful pursuit for the rest of it. I tried really hard to appreciate what I was watching, but the clown was a bad guy I didn’t care for and the kids were silly to pursue the unknown.

When I first heard that It was over two hours long, my initial thoughts were horror movies can not be successful if they go too long. When the kids reach the sewer dwellings for a final showdown, it hit me at that point, this story was dragging and pretty much lost my interest there. I say this, knowing that the majority of the population will love this movie, but it wasn’t for me. On the drive home, the girlfriend and I analyzed the movie and I mentioned the writers could have easily eliminated two characters (the outsider and the bullies) from the story, saving lots of story time, which would make the ending more impactful.

It will save the end of the summer box office and be the fall’s first big hit because of the special effects. Pennywise 2.0 could be what Stephen King really intended for his book, or a twisted version created to satisfy the horror fans of this generation.  It really doesn’t matter if you’ve seen the original or have envisioned your own version of this clown, special effects have come a long way since the 1980’s. The terror he brings this time around will go beyond your wildest imagination.

What I felt was missing from the overall story was who is Pennywise and why does what he does. If the writers took the time to have a main character do all kinds of research about horrific events of the town’s past, then why not give us more information about why the present is happening. 27 years is a long time to go between attacks, so what does a clown do with his down time? If the whole purpose of the research is for our main character to figure out he only attacks every 27 years, and plot then his revenge, then I feel the writers failed to engage me past the surface of the story.

It is not the kind of horror movie you would expect. Maybe the whole point of this wasn’t to be scary at all, but to show how bad things happen to good people all the time, and that good can conquer evil. If the movie intended to show me how twisted evil can be, then it succeeded, but I’ve seen this all before in other stories with darker characters. Clearly I went into this expecting something else, because  the divide and conquer was entertaining, but not enough.

I swear It isn’t all dark and gloomy though, the one thing I loved most about the movie, the dialogue, and the characters is the sex jokes. One would think a bunch of young kids wouldn’t have such vivid imaginations, but hang on to your hats because these kids will say stuff you wouldn’t even joke about with your best friends. That comedic relief happened at the right moments, which helped ease the tension of the nightmares and crazy clown appearances.