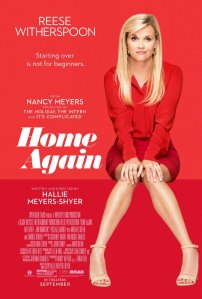 Home Again is fun, charming, and delightful. The majority of romantic comedies involve some drama between lovers or friends, which complicate matters beyond most people can control. What makes Home Again unique is the complex situation we find our main characters in.

Reese Witherspoon is a divorced mom of two, whose father is a legendary film director. She happens to stumble upon three up and coming guys who are looking for their break in Hollywood. Fate brings them together because she needs some help adjusting to single parenthood and these guys need a place to crash. Of course one of the guys falls in love with her and together a sexual relationship threatens to destroy a cozy relationship between the guys and her daughters. In steps the wanna be dad of the year, and you can see the eruption that is about to take place.

There is a lot to laugh about here because the cast sells their awkward situation perfectly. You rarely hear of a situation like this one, so I felt this was a fresh approach for the genre. Love and sex always play a major factor in the unraveling of most situations, which makes it fun to watch the young guys make mistakes and become better people because of it. Some people consider It to be a coming of age movie, and the same thing could be said about Home Again. Most people are genuine in their hearts and actions, so it’s pretty cool to see everyone gain something really valuable from this story.

This situation would rarely play out with all the sunshine and rainbows like it does here, but no can deny that fate works in mysterious ways. People come and go from our lives for a variety of reasons, but everyone who has meaning will leave an impression. Friendships are formed with people you least expect, which can lead to a lifetime of fond memories. Sometimes we all get stuck in a rut and meet people who make us realize the worse is over and the future is bright. Ultimately these are just some of the lessons I took away from Home Again. I watched it expecting a romantic-comedy of three guys trying to get with the same girl, but instead was spoiled with three brilliant guys who saw the finer things in life and after a few bumps, managed to become better people from them.

You may not have interest in this story, which I understand since it was released along with a box office record breaker, but let me say the story and the laughs will be worth your time. I know I’d be down to watch this again someday.