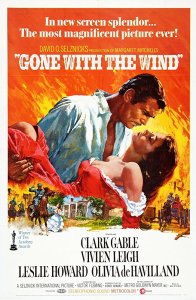 What is there left to say about Gone with the Wind, 78 years later? This iconic film is regarded as the highest-grossing movie of all-time (adjusted) and hailed as one of the greatest masterpieces in cinematic history.

Rhett Butler (Clark Gable) is hailed as one of the most fantastic male characters to grace the big screen, while his on-screen counterpart Scarlett O’Hara (Vivien Leigh) is considered one of the best female characters ever written.

This long story (3 hours and 58 mins with an intermission) is about so many different topics but always stays centred around Scarlett and her emotions. There was nothing this girl couldn’t do or get except the love of her life. Lucky for her, though, someone else fell in love with her, and their paths seemed destined to cross forever. Through the good times and the bad times, these two always came together, and that is what makes their relationship so unique.

Set during the civil war, this movie doesn’t hold back on the time’s stereotypes and action. The war cleaned everything from the region where the story takes place, so even though this isn’t about the civil war, it is all about the short-term and long-term problems associated with conflict in the country’s early years.

The majority of the population have watched this movie (and probably own it), while others know of it but have never ventured to invest their time into it. I’ve seen it twice in my life and can say I appreciated it on a whole other level the second time through.

If there was a movie hall of fame, Gone with the Wind would have been one of the first inductees and would mostly have its only room to showcase its greatness. My advice is if you haven’t seen it, or haven’t seen it in a while, go watch it and remember how breathing movies from the golden age can be. 9/10