game summary: A tribe of apes live in the Rocky Mountains and run into a group of humans living in an abandoned town. The story is about which side can win a war in order to harvest food and survive the upcoming winter season.

my thoughts: If you love Planet of the Apes as much as I do, you may have gone the great lengths I did to purchase and play this one of kind video game. I don’t play video games and when I did, I never branched far from the typical EA Sports games like hockey, baseball, and football. Role playing games were always either complicated or boring for me so I can safely say that I’ve never played Tomb Raider or even ventured into those first person shooter games like Call of Duty. You may wonder why I bring those two games up. I mentioned them because I figured for the first time in its illustrious history, the characters from the Planet of the Apes would finally have a video game, released in a day and age where a top quality product can be produced.

I am very fortunate a friend of mine has an undying love of Star Wars and bought the special edition PS4, thus disregarding his older system. That system ended up at my house for one reason only, to buy this video game and play it. I didn’t know the game would take about five hours to download, so I let it sit for a few days before I actually played it. I stayed away from the reviews as much as possible because I didn’t want to be spoiled. The only thing I read was there are different endings, all depending on the decisions you make in the game. Sounds pretty creative right? I mean the concept of the game was helped along by Andy Serkis (Caesar in the trilogy) who even did motion capture for the apes in the game. With our fallen hero as a lead on the project, what could be wrong with this game?

My disappointment started right off. This isn’t an action game, it’s not even a role-playing game. It is a story played out in an imaginary town/country side, where you have zero control over the characters. There are no button combinations to learn, or secret passages to be on the hunt for. Your main job is to just sit there and watch a movie of sorts, then a moment will happen where you got to make a decision. Some decisions are easy and some are hard. The catch to the whole thing is, the very first decision you make can have an effect on the 138th one, the 264th one, and the final outcome of the story. That’s it folks. Two decisions pop up on the screen. Move the arrow to the one you want to pick and watch the characters react to whatever it is you chose.

(Got to think every decision through, to get the outcome you’re fighting for)

Not to be the bearer of bad news, but there are three endings. Apes win, humans win, or there is peace between the apes and humans. Caesar is by far my favourite character in the history of movies, so I tried to play the game to the base of my abilities based on what he tried to achieve for three films. A safe place for apes and a peaceful relationship with humans. In the end I got 11/36 trophies and the humans and apes lived happily ever after in peace. I got the ending I wanted because when it was decision time, I tried to figure out what would get me to the end three hours later. The game is very short and can be beaten in two to three hours. Because I am a greedy person, I have convinced Ana to give this game a shot, so I can maybe rack up a few more trophies and get a different ending. In the peace ending, everyone wins. I’d love to see how nasty things get when the humans win or how much blood is shed for the apes to win. I know those two endings is not what Caesar would have wanted, but games are meant to be played with much different outcomes.

In my mind, there are really only two tribes of Apes that make up the Ape Universe. Cornelius, Zira, and Caesar from the original five movies. Caesar, Maurice, Luca, and Rocket from the most recent trilogy. The more Apes material I add to my collection, I have come to learn that there are plenty of tribes of intelligent apes out there. We get introduced to a whole new group of them in Last Frontier, so if you were looking for Caesar and the gang, they are not here. The leader of this tribe is Khan and his three sons Bryn, Tola, and Juno. According to online reports, these apes are renegades and were followers of what Koba fought and died for in the movies. Not that I am spoiling anything, but I got Khan killed, which ended up putting Tola in charge of the Apes. I wonder if that outcome was different based on prior decisions. Tola could have been the son of Koba, because their personalities are similar. He wants human blood and will kill any ape or human who stands in his way. The situations he puts the apes in will drive you crazy, but his intense fight with Tola was pretty fun to coordinate. A few pushes of the X button led to a changing of the guard, and a much more level-headed Bryn took command of the apes. Juno meanwhile is thrown into the mix to really mess everything up. He reminded me of Bad Ape from War, except Bad Ape was intelligent. Julo causes a lot of problems because he trips over his own two feet and is a distraction no one needed. To please the fans of Maurice (Bornean orangutan), there is a wise old orangutan named Clarence who provides advise to Khan before his death. Sadly no one really respects him, despite his experiences and extensive knowledge of the humans. 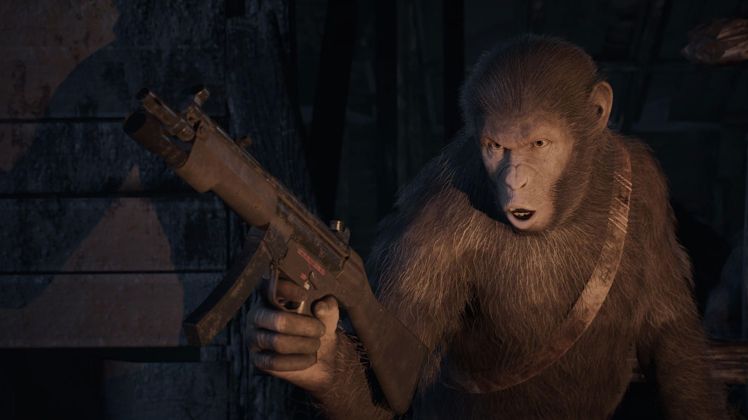 (It would have been epic to control the apes with guns, but this game wanted to be different)

The humans meanwhile live in a town called Millerton and just lost their “leader” Mark Ross. His widow wife Jess Ross takes command and is put through the ringer to protect the crops and the surviving humans. She is second guessed at every turn by Luke Rainey, who is someone you will hate from the moment he’s introduced, all the way to the end of the game. Sometimes I wished he would have died, but he is by the far the least of Jess’ problems. A few minutes into the game two outsiders come riding into town, Jakob Willits and Oswald Reeves. These two are “injured” but reek of trouble. You can turn them away or use their valuable ape hunting knowledge to your advantage. Sadly I welcomed them and paid for it much later. A chain of events occur which made me regret letting them in, but hey at the time it seemed like the right thing to do. The only other major player on the human team is Maria Weber, who is like the town nurse because of her medical training. Together these people need to put their differences aside and focus on the apes, instead of the drama that rises up amongst them. There is a scene early in the game with the apes are on the hunt. A different choice here or there could have prevented the epic showdown between humans and apes, but I bet something else would have trigger the showdown anyways.

(Millerton, somewhere in the Rocky Mountains, far away from San Francisco and Muir Woods)

Like I mentioned before the game disappointed me. Whether my expectations were too high or not really doesn’t matter. I am not the only one with mixed feelings. It currently holds a 59% on Metacritic, 3/5 on Eurogamer, and 5/10 on Gamereactor. If you also dig a little deeper, you’ll learn that there are in fact a handful of glitches throughout the game, which may make you miss a few minutes of the story. I thought it was just my copy of the game or the system, but I was not alone and you won’t be either. The gameplay is very easy so anyone can play, decisions are hard if you think them out and want a certain ending. There really isn’t much thought required to play the game, and you won’t need a walk through or cheat codes to get to the end.

For someone who doesn’t play video games, but sees commercials for them all the time. I’ve come to realize how life-like today’s games are compared to the Nintendo I owned a kid or the original Playstation I bought in 1999. The special effects in this game are mind-blowing. The details of the human and apes characters is amazing, you will feel like you are actually watching a movie, not watching a video game. Research has informed me that Last Frontier happens between Dawn and War, which I find kind of interesting considering these events will never actually interact with Caesar and those events.

This game is really a standalone game that doesn’t have anything to do with the Planet of the Apes franchise, except the fact we are seeing intelligent apes attacking and killing humans. That is the only connection between the game and the movies that have defined how we view apes. Hopefully a handful of you out there have played this game and feel more or less the same way I did. I still love the Planet of the Apes and waited for this day to come for a long time. In the end we deserved more, but we should appreciate the efforts of those who brought us the first ever Apes game.