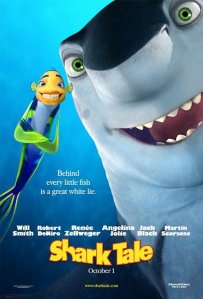 If you don’t like Will Smith, Robert DeNiro, or Shark Tale, you should probably just stop reading this review. Once upon a time ago, I was subjected to Shark Tale and at the time, I honestly thought it was the silliest thing ever. Fast forward about 14 years and I voluntarily watched Shark Tale again. My opinion of this movie is going to be 100% basis because I love anything DeNiro does and when Smith wants to be a comedian, he can hang with the best of them. His character Oscar carries this film from start to finish and even though the story is centered around him, there is so much more to the fish world then just Oscar’s problems. I loved the hundreds of pop culture references littered throughout the film, and the character references of the major actors/actresses in the cast from their other more popular big screen roles. There is a Godfather reference, a Fresh Prince of Bel Air, and one of Hollywood’s most famous lines from none other than Jerry Maguire. It sounds crazy to say out and we’ve seen played out before, but when two polar opposite characters come together to save face, the problems are always endless and so are the laughs. This animated movie should never be compared to Finding Nemo or any other fish movies because it is unique as it is and one of Dreamworks’ best animated movies that involve animals/creatures. I’d be inclined to watch Shark Tale again for fun and if I ever found it in bargain bin I think it would be worth a few dollars. Now, I am not saying this is the greatest animated movie of all-time, I’m just simply stating that this movie entertained me than I could have ever given it credit for. I think the voice cast helped persuade me to like it more than the average movie, because face it, if this movie was voiced by a bunch of unknowns, the comedy wouldn’t work, the references wouldn’t fit, and we wouldn’t have Shark Tale to tell. 8/10