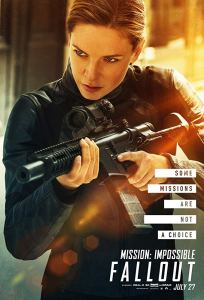 The latest chapter of the Mission Impossible franchise is being hailed as one of 2018’s best movies. Those high scores may be based on several different statements, like Henry Cavill fist fighting with Tom Cruise, endless car and helicopter chases, or the fact that Michelle Monaghan returned to add more drama to the finale. Maybe people love Rebecca Ferguson like I do, or found themselves drawn to the lovely Vanessa Kirby. If none of that worked for you, maybe it was Simon Pegg and Ving Rhames, who love to play hilarious tech-savvy sides. If nothing I just said reeled you in, I’ll tell you about the breath-taking scenery that accompanies many of the run downs, car chases, and helicopter crashes. Really there will be something for everyone to love about this movie, even if you hate Cruise, but love spy action movies. Having said all that, there are some minor drawbacks (we can call them hiccups) that prevent Fallout from being the absolute best movie of the year. First, the bad guy is obvious. It is really sad that the story was written that way, but not much we do about it. There was no “oh my God” kind of moment because the film really tests IMF’s patience for bad guys. There’s this guy and that guy, then they have to kidnap this guy so they can talk to that guy. Sometimes you wonder who the actual bad guy is, but then some action happens and you kinda forget who the target is/was. They tried to play up some hefty double crosses, they just didn’t pack the powerful punch you would expect. The second major flaw only occurred to me on the way home when Ana (this was her taste of Mission Impossible) pointed out that Ethan Hunt was gonna win no matter what. Then it hit me, the endings of these movies are pretty predictable. Which then kinda ruined the excitement I had, because she is right. Obviously, he’s never lost and something tells me he isn’t going to anytime soon. That took a little bit shine off the story, which I am kinda willing to overlook because I had a great time watching an action-packed thriller that was one of the weakest stories in the franchise. There will never be any closed chapters in the IMF universe (unless you die), so I liked how Fallout brought some stories from the past back to life to give them an “ending” so that new opportunities can present themselves in the future. Who knows when we will finally see Ethan Hunt on his final mission, but as long as they continue to come up with terrorist for him to fight and ridiculous stunts for him to dangle from, I’m all in. 8/10

One thought on “Mission Impossible: Fallout (2018)”