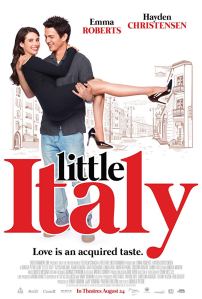 It can be debated that the romantic comedy is dead. Long gone are the stories like Pretty Woman, When Harry Met Sally, and Sleepless in Seattle. With the exception of The Big Sick, there hasn’t been a movie that really goes back to the roots of makes make these particular stories so great.

Little Italy may have stiff competition in Crazy Rich Asians, although the latter one is more about lifestyles of the rich and the famous. What makes Little Italy so special is its simplicity. Filmed in Toronto and backed by every possible Canadian film company, this film is about two lifelong best friends who have loved each other forever but never acted upon it.

There is so much to like about this film thanks in large part to the crazy performances from everyone in the cast, which included Emma Roberts, Hayden Christensen, Danny Aiello, Andrea Martin, Alyssa Milano, Gary Basaraba, and Adam Ferrara. Forbidden love and friendship is the main theme even though divine power has laid the crumbs for everything to work itself out some day. Bitter enemies because of a pizza contest that went wrong, it is hilarious how far each family will go to outsmart the other and just create drama to fuel the rivalry.

Some people run away from home chasing dreams and happiness when sometimes they just need to listen to their heart because the heart always knows. There is no place like home and sometimes returning there takes more courage then actually leaving. These are just some of the moments we share with these people who have built themselves a wonderful life in the suburbs of Canada’s largest city by owning pizza places. A family is important to all of us, whether they are crazy or insane we still got to love them. Little Italy may be about a forbidden romance between two people who love food, but it is also a wonderful story about the bonds of family. 7/10