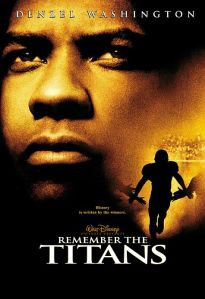 I may get a lot of flack for this and I am willing to accept that. Personally, I don’t quite understand why Disney’s Remember the Titans is hailed as one of the greatest football movies of all-time. Is it because the story is centered around a white school finally accepting black people? Is it about a black coach breaking the barriers at the same white school, where he is replacing a coach who is considered one of the greatest of all-time? Or is simply a story about boys becoming men, learning that being someone’s brother takes a lot of work and that even the closest families have their ups and downs. Maybe it is the pursuit of the perfect season, which is the ultimate goal of any sports franchise, except it is more achievable in a short football season.

If you have read this far, you’ll know I just summed up the entire movie but skipped all the intensity and drama that comes with a movie about high school football. Don’t get me wrong, I think Denzel Washington gives one of the better performances of his career, but the story overall is nothing out of the ordinary. The 1960’s was a time of change and in those times, millions of stories were told, some good and some bad. To really stand out in a time where it was white versus blacks, you needed a great story. One worth telling in history books, one that altered people’s lives for generations to come. I wasn’t feeling that here. Simply put this was white people accepting black people and the awkwardness of those interactions.

Football has given Hollywood amazing stories, built on character, passion, and motivation you barely see in other sports. I would say Remember the Titans is a good movie, but not one worthy of a football Oscar. I think one of the reasons people hold this movie so dear is the title. “Remember the Titans”. If you say it over and over or even start chanting it, it can be powerful and moving. People want to remember the Gods from centuries ago, but I don’t even remember these titans until I watch the movie again. 7/10