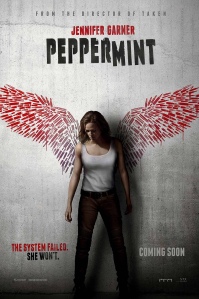 Personally, I do not understand all the hate for Peppermint. This movie was badass and Jennifer Garner rocked the Riley North character. People have complained that the film is exactly like the 4.5 million other movies about revenge and that she didn’t break the model. Garner didn’t have to change a thing because the model was fine as is, but what she brought to the formula is something we haven’t seen before.

There have been other woman in Hollywood who have been good at killing people, but I got to say no one was brutally violent about it. You would think someone who is still emotional about losing their daughter at a young age would get caught up on something somewhere, but not Riley. She had a mission and no matter how much pain she suffered through physically or mentally, she was determined to end everything her way. Yes, she followed in the footsteps of so many others who murdered dozens for revenge, but she was clever about her ways of vengeance. You would have never thought technology would play a major part of the story, yet she uses it to her advantage. Bad guys always want blood and just like a shark, they go straight after it and disregard everything else around, and that’s how they always go down. They lose sight of their surroundings and it comes crumbling down.

I think if you disregard the negative reviews and press that Peppermint has gotten, you’d enjoy quite a movie. The story never digs deep enough for you to know how Riley became so skilled, but that’s just one of the aspects to enjoy about her character and her lack of care for bloodshed. I know you’ve seen this same story over and over again, but I promise this is a new angle on the old story that was really enjoyable. 8/10