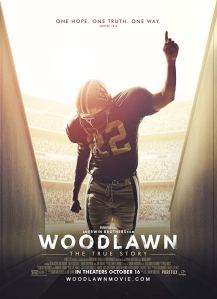 Woodlawn is billed as the true story of Tony Harris (Caleb Castille), one of the most gifted football players ever to play in Alabama. This film wanted to be a biography film much like The Express was, but really failed at everything it set out to be. Lost in the overcomplicated plot of a high school running back getting selected for the University of Alabama is the religious movement of the 1970s. Sprinkled in between football and prayers is the race war that was still boiling during this time period in the south.

Instead of focusing on one story and running with it, we get a story about someone talented and pushed to his limits not by other players but by God. Sean Astin, who played cult hero Rudy in another movie, introduces a Jesus movement to the team and instead of the game is the most important things in a player’s life, God should be. The sports culture in the small community changes and spreads through various other high schools. Meanwhile, Harris continues to run in touchdowns and get scouted for college ball. You almost forget this is a movie about him and not Jesus. There also the flip side to it all which may push people away. I’m fine with watching a religious movie, but Woodlawn really kinda forces their movement on you and the characters, making you wonder how things really were back then.

I went to see Woodlawn in theatres back in 2015 (still got the ticket) but never reviewed it. Personally, I dreaded the second viewing because I didn’t recall liking it the first time through. My opinion didn’t change this time around, except I tried to stay focused on the football action and not the Jesus movement. In some ways, I wish this was a different kind of biography, one that showcased Tony Harris’ talents and not end with the dates of the next movement gatherings. Whether a slap in the face of football movie, religious movies or biographies, Woodlawn never could figure out what it wanted to be and in the end cost them a shot at being a standout film in any of the genres it was aiming for. 4/10