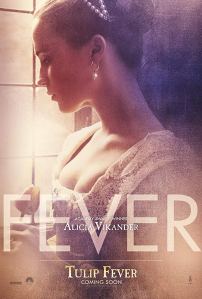 Tulip Fever had a very slow beginning, peaked way before the ending, and gave us a rather crappy ending. I caught this film on my flight to New York recently. It featured one of my favourite actresses today, Alicia Vikander, in one of her steamiest roles yet. Decorated in elegant dresses of the era, she probably spent just as much time in them as she did naked in her lover’s bed. The story is centred around her stumbling into a marriage with a rich benefactor Cornelis Sandvoort (Christoph Waltz), while she falls in love with a poor painter Jan van Loos (Dane DeHaan), and risks it all during the tulip rise to fame and fortune in the 17th century.

When she finds out she can’t have kids and her house keeper is pregnant, these two form a bond with a crazy doctor to substitute one problem for another. This 20-40 minutes of the film is what suckered me in and had me intrigued on how things will play out. I hung to whatever commotion the girls would cause in order to protect their darkest secrets. I had rather hoped that during the child birth the plan would get foiled or something even more dramatic would happen, but it really doesn’t.

The overall story has many moving parts and only a handful of loose ends get a proper ending, while Sophia (Vikander) and her part of the story just disappear. Considering the amount of award-winning talent in the film, I would have thought the ending would have satisfied all the hunger I had built up through the cover-up, love affairs, and betrayals. Some could say there was a happy ending for all those involved, while others may be disappointed in the shocking turn of events. Everyone may seem happy at the end according to the girl telling it, but with so many secrets to take to their graves, how can one truly be happy. 4/10