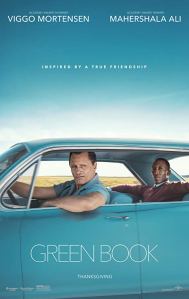 When Green Book was first released I had missed the opportunity to see it on the big screen during the original limited release. I will be forever grateful for the numerous awards the film has already won because it got rereleased! We went last night to see this Oscar contender for best picture and let me say I will watch patiently on February 24 to see if this masterpiece wins.

Green Book deserves nominations for best original screenplay, best supporting/lead actor, and best film because it is one of the most complete films you’ll ever see. The chemistry between Mahershala Ali and Viggo Mortensen is undeniably one of the best duos to perform in a biopic. They don’t just bounce lines off each other, you see two complete strangers form a bond that only families can relate to. In a film all about race, it is not actually about race at all. The movie focuses so much of its attention and energy on the Don Shirley and Tony Lip characters, you forget that most of the story takes place in the southern United States. It is the good and bad experiences the guys face on the road that is the heart and soul of the story and their friendship.

You will bust a gut laughing as two polar opposites have to share a long journey together in a light green Cadillac. You see how they feed off each other and become better people for being in each other’s lives. This is set in the 1960’s so the racial tendencies are front and center. It is just so inspiring to see these two defend one another, even in the face of imminent danger.

People change, it is just a fact of human nature. To capture such an amazing story and then capture it all on film in a way that sets it above and beyond anything we’d come to know, is pure magic. Green Book is a movie you have to watch, it is something you can’t shrug off, it is a movie that is so powerful and uplifting that it could be brought up years from now and still have a significant meaning.

Green Book may not win the best picture statue, but I guarantee it will walk away with at least one Oscar. Even if for some reason this film gets shut out at the biggest show of the year, it will leave a long lasting impression in the hearts and minds of those who ventured out to see it. 10/10