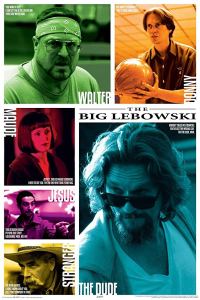 The Big Lebowski is a cult classic. I’ve heard a lot about this movie and I’ve seen many clips from the film. Everything about the movie, including the fact it was written by the Coen brothers, screamed to me to stay away. I finally broke down after 21 years and watched it.

What a disappoint from start to finish. This movie was so slow and uneventful that I never got engaged or interested in anything going on in this nonsense story. Jeff Bridges plays “The Dude” and sorry to disappoint all the lovers out there, but whenever he says my name is The Dude, all I can think about is Tropic Thunder. Robert Downey, Jr. has a hilarious one-liner “I’m the dude playin’ the dude, disguised as another dude!” I couldn’t take Bridges character seriously because no one can call themselves The Dude. John Wayne or classic Clint Eastwood couldn’t even pull that stuff off.

John Goodman’s performance was the only highlight for me, even though I bet they just asked him to show up to scream and shout. He pulls a gun every now and then is completely off his rocker. Only a crazy person would throw a bowling tournament by threatening to shoot a player from another team. If you think that sounds ridiculous, wait until Julianne Moore’s character comes into the story and messes with The Dude’s head, that is pretty trippy.

Thankfully this movie, loved by fans, wasn’t nominated for any Academy Awards, but currently sits at #170 on IMDb’s Top 250 movies of all-time. I understand the Coen brothers write some successful, yet off the wall, kind of movies that audiences eat up. Is it because they are real or because they create characters that everyone relates to and wishes they could be? I can’t really pinpoint what I don’t like about their stories, but I can’t enjoy them. 3/10