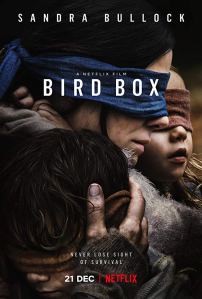 Netflix knocked one out of the park when it released Bird Box. The film took the internet by storm, not just in viewership, but the trolls in cyberspace who feasted on the movie’s reliance on blindfolds with countless memes.

The craziest part of the entire movie is not the ridiculous story, it is the fact that the only humans who survive the attacks unharmed are the mentally unstable. What? That makes absolutely no sense. Sure, it adds an element of surprise to the overall story arc, but that just wouldn’t happen in real life. Bad people don’t instantly become good again by looking into the eyes of a mysterious creature. There’s absolutely no explanation of the attack and no chance to see what the creatures really are. Given the state of the world and the unknown, who is to say that this “attack” couldn’t happen for real. The experts really know just as much about the stars and universe as they do about curing a common cold.

There are parallel stories being told at the same time. I’ve never been a huge fan of the back and forth storytelling like that, so naturally, I liked one story better than the other. When everyone is huddled in the house arguing back and forth about how to survive that was exciting. When Sandra Bullock’s character is floating down the river, that was less compelling. Every movie about the end of the world always focuses on a group of survivors. The fun always happens when complete strangers think they know how to survive better than the one next to them. More people would survive if they actually worked together, but drama always tears them apart.

Bird Box wasn’t as revolutionary as people think it is. When you tear off the blindfold, you’ll see it was a cookie cutter end of the world movie. There’s the handful of survivors, their fight to escape, their goal is a sanctuary that no one knows about, and the invasion was orchestrated by some creatures or events that no one can explain. I hate to say it, but the memes about Bird Box were more enjoyable than the film was from start to finish. 5/10