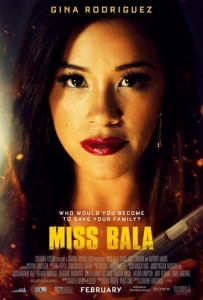 You know that you’ve had a bad opening weekend when everyone was talking about the Super Bowl and the box office was won by movies that have been out for weeks. Miss Bala did not live up to expectations, hence the third-place finish after opening on Friday. Weather problems aside, there was only nine of us in the late show on Sunday. This film was the weekend’s biggest wide release…

Gino Rodriguez can only do so much with a character that was given about four minutes of back story, then thrown to the wolves of the cartels. How a makeup artist can go from fashion shows to cartel hitman is really ambitious fictional writing. It is not believable which makes the story even less interesting. She’s not a secret agent and trips over her two feet so often that you forget what she was after, to begin with.

I have never seen the original, nor did I even know this is a reimaging for English audiences. In a censored friendly world, this movie could have been so badass. With no limits on the gore and violence, Rodriguez could have gone off the charts with her actions and leave her stamp as someone you can’t mess with.

Sadly this movie bombed which means there will not be a sequel. The ending leaves the story and characters open for a second chapter so if you had any questions about the story, this will probably be all you get. 4/10