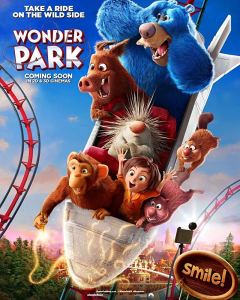 Wonder Park was produced by Nickelodeon, which means it didn’t have the budget or media attention of a Dreamworks or Disney/Pixar production. That is sad because Wonder Park was an awesome movie that was fun, entertaining, and emotionally engaging, packed with loveable characters.

Some could say this movie is dark, based on the subject material, while others could point out they never really discuss the darkness and leave it to our imaginations to figure out what really happened to June’s mom. That’s not the main point of the story, but it was the turning point for both the good and bad of the park and the many people affected by it.

What I loved the most was the park itself, (not the rides of course, because I’d never be caught dead on those crazy things), but the animals in them and the joy they bring to thousands of imaginary families. Peanut (Norbert Leo Butz) the monkey was my favourite. He was strong, funny, and would bring to life all of June’s creations in the park. Boomer (Ken Hudson Campbell) the bear was funny because he had a sleep problem and whenever they needed him, he was passed out somewhere. Greta (Mila Kunis) the warthog was the strongest of the bunch and her leadership kept everyone together. These animals were the heartbeat of the park and when the darkness came, they didn’t quite know or understand what to do, but they tried their best to survive.

I am not sure what others will think but the Chimpanzombies were hilarious! By far one of the best-animated villains I’ve seen in a while. Loveable and deadly at the same time, you can’t help but laugh out loud when they are on the attack. They may be a little over the top, but they worked as the park’s antagonists.

I really enjoyed Wonder Park and feel bad the movie hasn’t had that much success at the Box Office. This film may have more viewership when released to home media platforms so my advice would be to catch it sometime there. 8/10