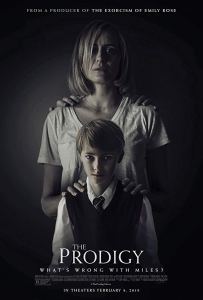 I really liked the prodigy because it gave us a totally different and unexpected angle on demonic possession. Although it was billed as a horror movie, I will admit this isn’t all blood and guts. It also isn’t all that scary. You should still be able to sleep at night.

Why I was pleasantly surprised with it was because someone people believe in reincarnation. I sometimes joke I had drowned in my previous life because I’m terrified of deep water. Whether or not that is a real thing or not is something we may never know.

Parents never want to believe something bad is happening to their kid. Some are fortunate enough to have them so they value and cherish everything they can. The nurturing parent formula works in horror movies involving kids because when the kid turns out to be evil, no one expects it or believes it (except the audience who knew all along). That’s the case here. Everything that happens in the story follows the same exact plot as so many other before it. It is the twist at the end that really sets it apart from other films like The Omen.

Really my mind was drifting off to find a comparison for this film and The Omen is really the only one that popped in my mind. I am not here to do a comparison, just wanted to say this is what The Prodigy reminded me of.

Like most horror films, the ending leaves you wondering what happens next. I am not going to spoil anything for you, but you will wonder what happens to a soul if it accomplishes what it came back for or if it fails. The Prodigy isn’t a movie I would want to own, but I was glad to have caught it during it’s run at the theatre. I love a good movie, especially one that makes you think about what is real or what isn’t. I’d recommend this movie because it is better than most of the subpar horror movies floating around on Netflix. 7/10